Beskri-Gujoh is a star system in No Man's Sky.

Beskri-Gujoh is a star system in the No Man's Sky universe.

This system is notable as it is the PC mirror of the PS4 chosen system for the AGT Natal Waterworld Colony Initiative. It was discovered and named by a non-AGT explorer.

By PC explorer Expod on 1-May-2019. It was explored and first documented by CELAB Galactic Industries. 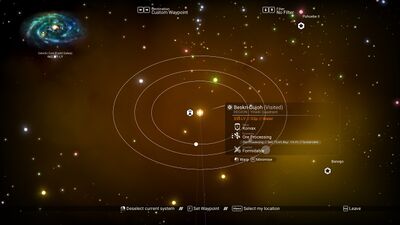 A Class B, 15 slot Multi-tool Oxide Analyser F-46P was found at the Space Station.

Documented by CELAB Galactic Industries based on site surveys during 21-April-2020.