Betazed is a star system. 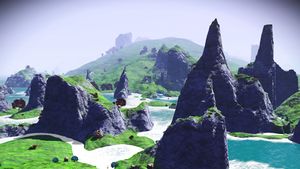 The characteristic rocky pinnacles of Betazed. 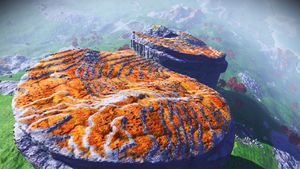 The surface of the pillars of Betazed. 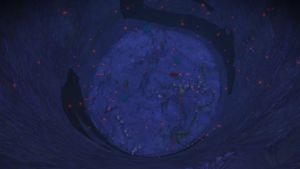 The interior of a hollow pillar.

Betazed is a planet in the star system HUB7-G-119 Alpha Quadrant in the universe of No Man's Sky.

Similarly to the other planets in this system, Betazed takes its name from a planet with similar qualities in the Star Trek universe.

It is a lush ocean world with pleasant weather, lavender-blue skies, and lavender and green grass.

A presumed irregularity in the water level generation creates certain oddities, most significant being the cave systems along the coast which are often half-submerged in water. Nearby may often be found tunnels which are coated in grass instead of the typical rock and iron deposits. Other consequences include occasional fish species flopping helplessly on land, or marine abandoned buildings jutting partway above the surface of the water.

On land, there are frequent large monolithic pillars, composed of lavender and orange rock. Interestingly, some of these pillars are hollow on the inside, accessible via Plasma Grenade excavation.

Days are clear with fog at higher elevations; there are occasional rainstorms. Daytime temperature is 1.4 °C.

Fauna are often unfriendly and not particularly unique, with the exception of a wraith (Oxyacta) species.