Beyond Reality is a player base. 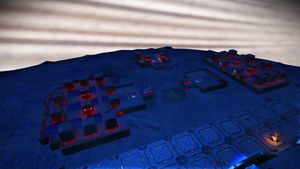 The arena is named and designed after a popular Quake Live arena called Beyond Reality. The arena's design provides ample coverage while promoting long distance combat and movement between separated platforms. Due to the low gravity, movement between platforms is quick and easy. Ambient lighting at the pillar's base provides just enough light during night hours for visibility while introducing a unique challenge for spotting opponents.

When using this arena, it is recommended that you have the Blaze Javelin installed, although it's not completely required. All range of combat is capable with Beyond Reality.

This arena was designed for, and approved for use in, the Galactic Hub Star League