Biomes influence a planet's general environmental hazard as well as the richness of animals and plants.

There are many types of biomes available for planets. The name of the biome appears in front of "planet" when first discovering a planet. The types of terrain will vary within each type of biome, creating the varied planetary appearance that the well-traveled player is familiar with.

Biomes do not influence the weather and therefore the intensity of the present environmental hazard. Each planet will only have a single biome to encourage exploration.[1] 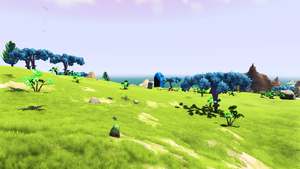 Worlds with lush biomes are characterized by colourful grass covering most of the surface. These are essentially the Earth-like planets. Depending on the amount of flora, trees can be sparsely found or sprawl into lush forests. Occasionally, one can find "Barren Lush" worlds where there is an almost, if not complete lack of flora, save for hostile vine whips. When viewed from space, it looks like it's covered by a carpet of grass. The resources Star Bulb and Nitrogen can be found here.

These planets have the most varied types of Genera. 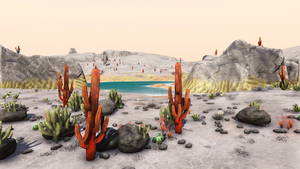 Worlds with barren biomes have a surface that is rocky and sometimes sandy. These are desert worlds. Cacti can be found here, of varying sizes. Occasionally, trees can be found here as well. From space, barren worlds look rocky, occasionally with some streaks of large canyons visible from space. The resources Cactus Flesh and Sulphurine can be found here.

TThis biome has the 2nd most ideal weather, as day temperatures are liveable. However, nights can get quite cold, enabling hazard protection. However, extreme weather barren worlds require both cold and heat protection due to wild temperature swings. The heat can get sweltering during the day, plummeting to freezing temperatures at night. Heat storms in extreme weather barren worlds are POWERFUL, draining hazard protection in a similar rate to a storm in an extremely scorched biome. 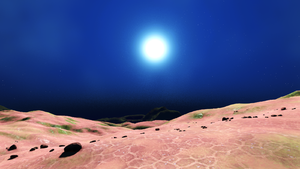 A dead planet with no atmosphere.
See: Biome - Dead

Low-atmosphere dead worlds are characterized by a complete lack of flora and fauna. They have rocky and dusty surfaces and are comparable to some real life dead terrestrial bodies, such as Mercury or the Moon. Some worlds have an atmosphere while others don't. These worlds tend to have higher amounts of resources compared to other biomes. Bring sufficient Power Gels and Thamium9 when exploring these worlds, as they increase the strain on Life Support.

Unlike other biomes, dead worlds never contain any structures such as trading posts, and storms never occur. 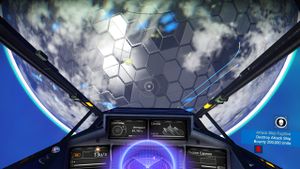 The Hex, only biome seen from space!
See: Biome - Exotic

Exotic worlds look like dead worlds from outer space, having similar characteristics. However, the surface is completely different. There are things here that cannot be found in any biome type except this. The game's code for these worlds is "Weird".[2]

Unlike dead worlds, there is no elevated strain on life support. Unique structures and vacant bases can be found here as well.

Unlike other planets, where the surface, plant-life, and rock formations are largely determined by what biome the planet is; Exotic planets have a handful of unique surface types exclusive to this biome. These include: Hex, Glass, Pillars of Aurora, Nanophage, Mollusc-Virus, and Metallic Bubbles. 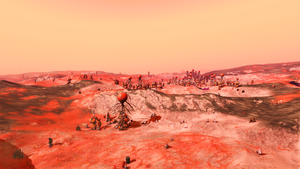 The surface of scorched worlds resemble barren worlds, being rocky and occasionally sandy. However, high temperatures has caused the flora to adapt in bizarre ways, with some having boiling liquids coursing through. When viewed from space, large channels of intense heat are visible. The resources Solanium and Sulphurine can be found here.

Note that Hazard protection is always on due to high temperatures. Coolant Network upgrades are recommended, especially on extreme worlds. 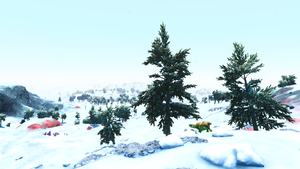 Frozen worlds resemble lush worlds in the ice ages, having a surface covered by ice and snow. Trees tend to sprawl quite a lot here. However, the less the amount of flora, the higher the amount of dead trees. When viewed from space, these worlds are generally snow-white in colour with a few dots. The resources Frost Crystal and Radon can be found here.

Note that Hazard protection is always on due to frigid temperatures. Thermic Layer upgrades are recommended, especially on extreme worlds. 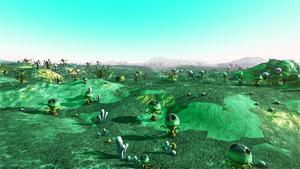 Toxic worlds are characterized by a seemingly endless rain of toxic gunk, a muddy-looking surface that is occasionally covered by a bright film of some unknown substance, and a serious infestation of various mushrooms, fungi and highly poisonous and bizarre-looking plants. When viewed from space, the planet looks muddy and has rivers of toxic ooze flowing through. The resources Fungal Mould and Nitrogen can be found here.

Note that Hazard protection is always on due to high amounts of toxic substances. Toxin Suppressor upgrades are recommended, especially on extreme worlds. 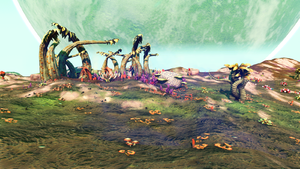 Irradiated worlds have a rocky surface with spirals, vents of steaming radioactive gasses and highly mutated, warped plants. Viewed from space, these worlds have lots of spiralling circles. The resources Gamma Root and Radon can be found here.

Note that Hazard protection is always on due to high amounts of radiation. Radiation Deflector upgrades are recommended, especially on extreme worlds.