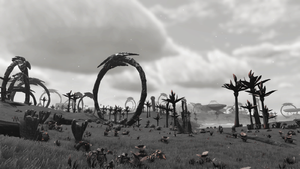 Mega Exotic is a variant of the Exotic Biome. 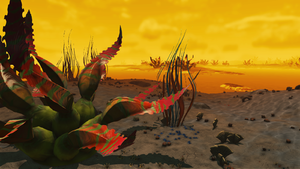 A Mega Exotic planet. Notice the yellow hue and the giant versions of underwater flora.

First appearing in the NEXT update, this variant of the Exotic biome (confirmed in Update 1.55) is characterized by having mega-sized versions of objects found in other biomes, like giant circular rock formations, algae, smokestack plants and trees. It has an atmosphere that refracts light into a certain colour, which can vary from a strong orange hue to a dismal black-and-white dystopia.

Though they are classified similarly to exotic planets, it seems to be on a class of its own. It has clear, normal and extreme weather with characteristics similar to lush planets. Flora and fauna here can be discovered. Waypoints are present if the system is inhabited. In the game file (found here), this biome is called Red biome in red systems, Green biome in green systems and Blue biome in blue systems.

From space, they look similar to Airless planets but they have an atmosphere. Look for them in red, green and blue star systems. 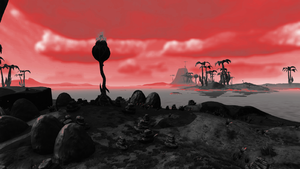 The biome type is indicated in the information panel when the player exits their starship. This is procedurally generated by adding one of the following prefixes to the Planet or Moon text.

There are exceptions indicated with 1 which do not receive additional text indicating the type of the astronomical body. The sequence is taken from the game file.

The weather listed here can be clear, normal or extreme.