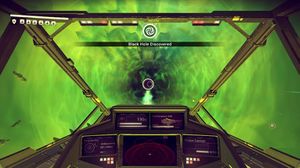 Discovery of a black hole

Black holes are a type of anomaly.

Black holes are a part of No Man's Sky. No one is quite sure how they are caused.

Black holes are a spatial anomaly that can be found by asking Priest Entity Nada in the Space Anomaly for "a shortcut to the centre," or by stumbling upon them in a Black Hole System. They also may be highlighted on the Galactic Map with grey triangular brackets, see additional information. Black holes take you to a random system across the galaxy and randomly damage one of your Starship technologies. If you learn the location of a black hole by talking to Nada, it will appear as a Waypoint selection at the top of your galactic map.