From No Man's Sky Wiki
(Redirected from Black hole)
Jump to: navigation, search
The subject of this article is from the Desolation update.
The information from this article is up-to-date as of 22 September, 2020. 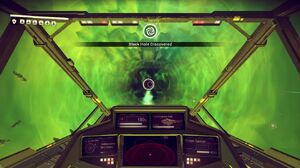 Discovery of a black hole

Black Holes are a type of anomaly.

Black Holes take you to a fixed star system across the galaxy. If any technology modules exist in your starship general inventory, one will be damaged at random upon arrival to the new system (modules in technology inventory are safe). Black holes will always move you closer to the centre by approximately 7,000 light-years (+/- 1,000 ly) unless they are part of the hyper black holes which can be used to travel insane distances of over 300,000 light-years towards it.

Even though your ship may be capable of traveling further by warping several times in a row, it does not fly a linear path. Instead, your warp navigation is calculated by navigating past several systems along the route. So if you travel 5,000 ly with your ship, you may only be 2,500 ly closer to the centre, or roughly 50% of the distance your ship actually travelled.

Black hole travel is one of the fastest way to the centre of the galaxy discounting the portals of the Atlas Rises and early NEXT era, which allowed permanent portal travel. Using black hole jumps, it is possible to reach the Galaxy Centre from the starting system (~700K ly away) in 2.5 - 3 hours. The effective warp speed achieved with black hole travel is ~5,500 ly/min. With Beyond and Synthesis changes it is possible to achieve effective warp speed of 5,900 - 6,000 ly/min using an Explorer with 3,300ly range. 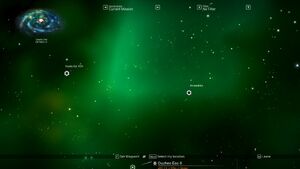 Black holes on a galactic map

Black holes are a spatial anomaly that can be found by asking Priest Entity Nada or Specialist Polo in the Space Anomaly for "a shortcut to the centre", or by stumbling upon them in a Black Hole System. If you learn the location of a black hole by talking to Nada, it will appear as a Waypoint selection at the top of your galactic map. Later on during the journey they will also be highlighted on the Galactic Map as a black star. After birthing a new star at the end of The Atlas Path, a traveller gains the ability to see all black holes on the nearby Galactic Map.

Every region has exactly one Black Hole System with the Portal System ID of 079 (079). This allows to track them down by using a local portal to find the system inside a region without the black hole radar. Be aware that since the late NEXT era black holes do not appear in systems that were reached by a portal, even though the signal booster may show the hexadecimal address.

The last number hereby refers to the same portal system ID, just with an extra 0 to fit the signal booster format.

Black Holes which are part of the four spirals of a galaxy have the unique ability to bridge huge distances unlike their normal counterparts, turning the Outer Rim into a black hole highway. Any hyper black hole will target a specific system all around the outer galactic shell and can bridge over 300.000 light-years towards the centre and over two million overall. This is due to a lack of systems around the centre at the same distance as the spirals. The nearest system possible around The Fade at the same angle is chosen. This also works to a lesser degree for all other black holes near the Fade aside of the upper and lower rim due to their limited radius of 50.000 light-years.

You can use a secondary ship for jumping through black holes. Basic primary systems will not break, thus that way you can save on repairing technology on your primary ship. Large inventory (A38+12, S38+12) Explorers and Fighters are good choices for black hole travelling as you can load 12 upgrade modules into technology slots thus having a starship with decent stats. InExCor Mobile PU1 Aiseha is a good example of such setup.

Living Ships can also be used and suffer no damage. (that is not true as of Desolation/PS4 - modules in general inventory do break)

It seems the decision to break something is taken a short while AFTER the jump. The two results are: