Breen is a planet. 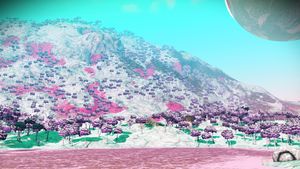 A mountain on Breen, with a classically pink lake in the foreground.

Breen is a planet in the star system HUB7-G-119 Alpha Quadrant in the universe of No Man's Sky.

Similarly to the other planets in this system, Breen takes its name from a planet with similar qualities in the Star Trek universe.

Breen is a snowy world of striking coloration and very unique fauna. The sky is blue and the planet's rock is primarily light green with splashes of hot pink. There are numerous lakes which are similarly pink, and the dominant tree species is purple. There are unusual sandy patches in some parts, including even on top of mountains, which are themselves a common feature of the topography.

Breen's fauna include five different blob-like species (Lok), one dragon-type (Cycromys), one bird-like species (Agnelis), and, most notably, the two aquatic species are a sea cow (Prionacefda) and a sea rodent (Unknown genus). Additionally, the Cycromys has unusual and amusing facial features, which have given it the nickname "rooster dragon." All this equates to a very appealing environment for exozoologists.

Days can be clear to cloudy but nights are always clear. Daytime temperature is -40.4 °C. 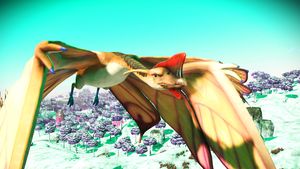 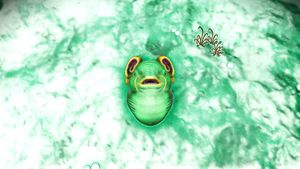 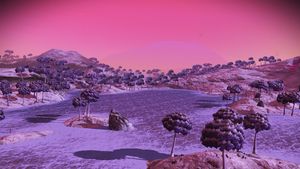 By dusk, hues on Breen may change dramatically.