Calium is a resource.

Calium (Ca) is a very rare resource, and a member of the purple Exotic elements class.

This rare substance can be found on extremely hostile planets. Its appearance can be a blob-like species or a green spherical deposit depending on the environmental hazard of the planet they are found on. The textures of either are randomly generated. 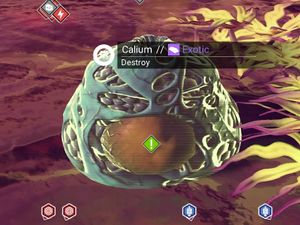 Calium found in a blob-like species

Rare substance found in many blob-like creature throughout the Galaxy.

Calium is used as an ingredient for crafting the following products: