The Capital Triangle is a civilized space community.

The Capital Triangle is the seat of power of the Sugaikinovi Fringe.

The Triangle has full control of the region and its four sectors:

The Capital Triangle is chosen as the seat of power as it represents the best traits of the region's denizens: Perseverance, Veracity and Fellowship. The three stars composing the Triangle can't stand alone, thus needing each other in order to be strong, symbolizing that regardless of the many differences each system has, they stand as one. 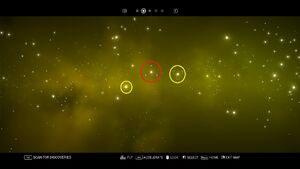 The following star systems can be found within the Capital Triangle:

There is only one embassy system per Civilized space, though it may change depending on circumstances. A Sugaikinovi Embassy always has 4-6 worlds, is either a yellow or a red star, and is usually located at the edge or just outside a civilized space's main region/s. Embassy systems either have a (Sugakinovi Embassy) tag or is unmarked. The planets inside the system have the SKFe tag. Numbered tags (SKF2 / SKFe2, 3, etc) indicate a new embassy, always after a previous embassy is put out of order (e.g. The Hebakal Incident).

There can be more than one outpost system per civilized space, but the government limits the number to 4. They are always located outside of a civilized space's main region/s and farther away than embassy systems, 2-5 regions away. Outpost stars always have 1-3 worlds and is a yellow star separated far away from the cluster. They are located close to each other, never too far away unless necessary. All outpost stars are unmarked.

An embassy is established in the Galactic Hub, located in the Uahakplatopo Adjunct: Ensihchyokintsv II (Sugaikinovi Embassy). Unfortunately, a terrible event known as the "Hebakal Incident" has caused many casualties and heavy losses, including the complete destruction of the main embassy planet Tucklingen VX864 and the sentient planet Hebakal-3 Zuhbogii.

Despite the gravity of the embassy's loss, a new embassy is established, but this time after intense scrutiny of the system's planets and gravity well. The embassy is now relocated in the star Yachkalugans (Sugaikinovi Embassy).

An embassy system to the Galactic Network of Systems is established at the star Litaiheunglon II at the Cevaruomus Terminus, located right next door to the Uiyalukyan Void and Imurukash Band.

An embassy system to the Amino Hub is established at the star AH Chichihiryugas (Sugaikinovi Embassy) at the Aspitiusi Fringe region.

The three star lacks certain resources but together, they're complete.

There are eight major government agencies in the region. Together, they maintain the balance and order while preserving the freedom of its denizens. Though the Capital Triangle is the seat of power, its government agencies are located at different sectors in order to quickly and efficiently carry out its operations.

While each planet, system and sector has their own police, the SKF Regional Police is the main police force of the region. They are responsible for protecting the peace of all denizens in the region. If things go out of hand at a particular location, they are the first ones to step in and help control the situation.

The elite police force and counter-intelligence agency of the region. There is no crime too organized, covered-up or downright abysmal that gets in the way of these bad boys. If you dare commit an atrocious crime, be prepared for the SKF Interpol will hunt you down 'till the ends of the universe.

The government-run media center provides news and entertainment for all denizens in the region. Despite being government-run, propaganda is rare and freedom of information is practiced. The media's news outlet is named "YACK! IT'S THE NEWS!", while its entertainment outlet is named "The Freaky Goat". The SKF Media posts news regularly in the Bulaan-Ezlegch Superregion.

Being quite an order-focused region, the SKF has a chain of prisons located at strategic points on each sector.

The main armed forces of the region. They are responsible for protecting the region from external and internal invaders.

The denizens of the SKF have an inherent curiosity of the things around them, thus this agency is formed. Only the best, most proven explorers are allowed to join here. Currently, there is one known member of this agency: Ezegnegch.

The SKF Elite Army contains the best of the best and the most merciless of the most merciless. Members of this agency are mostly emotionless husks that are trained to follow every command without fail, regardless of basic lifeform rights. Extremely rigorous training divided into seven stages (See the lore section of Ewussenda Mulan) ensure that its members are of the highest quality. Currently, there is one known member of this agency: Ezegnegch.