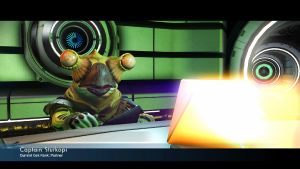 Captain Sturkopi is a procedural generated NPC and resides at the counter of the Space station in the G-18 Gala system.

No official lore for this NPC exists in the game. The player can interact with Captain Sturkopi the usual way, though.

Captain Sturkopi is the proclaimed leader of the Free Folk of the Fringe, a fan fictional civilized space project.