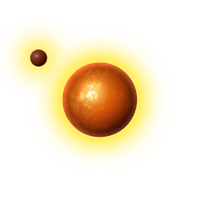 Catalyst elements are one of the eight divisions of the resources in No Man's Sky.

These elements can be found in flora, minerals, and Resource Deposits. Can also be refined.