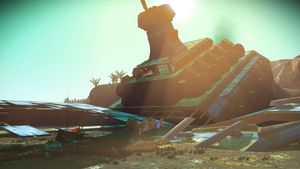 Battle Wreckage from Sentinels vs. Vy'keen

Abandoned Planet. This planet serves as a proving ground for Vy'keen warriors. Before entering the field as exceptional warriors, many Vy'keen soldiers are placed here on Charyongo to hunt Sentinels. If they survive, they are accepted into the highest of Vy'keen ranks. If they die, well...they're dead and have failed their people's test. While the Sentinels here are dangerously aggressive, they are contained to this world by the Vy'keen and no Sentinel reinforcements have ever dared enter the system with such a militaristic Vy'keen presence. No trade routes have been established, but very few outposts are still intact. Wreckage of would-be trading freighters (picture below) can be found across the planet.