From No Man's Sky Wiki
Jump to: navigation, search
This page fills the role of Embassy for a Civilized Space community. The information found here represents a user-created civilization that is a creative addition to the game.

Circle16 is a civilized space community.

Circle16 is a Civilized space community. Our group was conceived as a creative roleplaying & storytellers' space for No Man's Sky. The basic concept for Circle16 is to bring interstellar travelers together to remember with others the stories of planets they have seen as well as making room for them to share their own chronicles. It is a place where you can RP and/or create stories set in No Man's Sky without disturbing the game lore. Our primary gathering place is located in the Lamhothat Void region of the Euclid galaxy, but Circle16 members come from many galaxies, travelling through space and time to remember universes.

Whether you are an experienced writer/roleplayer or someone who is new and simply wants to give it a try, you are welcome to join Circle16. The group is intentionally designed to be inclusive, supportive, comfortable & FUN. We are open to those who have membership in other groups and are always happy to collaborate on projects together! We love multimedia and have access to make our stories come alive in many ways. Our greatest goal is to make connections easier for players who are looking for roleplaying opportunities.

Outside of the game, we have crafted a storytelling system that is inspired by and mirrors the 16 portal glyphs in the game. Most of our stories are collaborative and shared writing on our Discord server, with some being posted on our website. We highly encourage our members to consider creating a writing Journal on the Wiki as well. Here is a quick guide to the circles we maintain on our Discord:

Our belief system invokes insightful collaboration, cooperation, inclusiveness & actively seeking out ways to involve players in new adventures they might not otherwise join. We do what we can to ensure that few players ever feel marginalized or excluded, working to create stories, art, music & game plots than do not pander to ugly stereotypes of any sort. We strive to be good stewards of the stories that came before us and to leave the best stories we can for those who follow us. We enjoy hosting & GMing game-related plots that make us think more deeply, approaching roleplaying as a serious artistic genre that has much to offer, always making sure to remember that the point is to have fun. 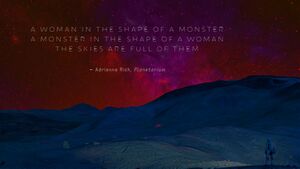 The Star That Made Us

In this iteration she was called Zin. Nantli Xocoyotzin. She had other names but this was the one that whispered of connections to the first star that made her. Her movement was constant. Sometimes it was so slow as to not appear to be movement at all. Other times it was faster than the light that traveled to her from the skies. It was insistent. It was precise and purposeful. The gathering of the sixteen circles was all that mattered now. The telling, the remembering, the acknowledgment of existence in all its forms. She moved through the galaxies, leaving circles for someone to find even though the odds were against it. From space, this planet had looked like many of the others. It was not until Zin landed that she finally understood. This was where she would make her home. This would be the way back that she never had before. This would be the place where she would wait for the others to find her.

Members are encouraged to name planets/moons with something that is connected to a story or history they create for the place they have discovered.

If you want to join us or have questions, there are all sorts of ways to find out more! If you are a member of another group that would like to collaborate on something together, get in touch! We are here to explore!!

Almost anyone who's been around the gaming world for any length of time will have heard the term "RPG." What is an RPG? It is a "Role Playing Game" where the player takes on the role of a character in the game setting. While No Man's Sky is not your average RPG, it offers a surprisingly rich environment for roleplayers and creative writers who enjoy using game universes as inspiration for their own tales. No Man's Sky allows you as a player to explore not only the vast number of procedurally generated worlds, but it gives you a sandbox for infinite possibilities as a creative writer or roleplayer. The world of RPers in NMS is as varied as the space you explore as a player. While it can take a little time and effort to find your way, the end result will hopefully be the camaraderie and fun of collaborating in fictional world-building with other players.

Here are some basic terms that you might come across here with Circle16 or elsewhere. This is by no means an exhaustive list. Check back to this section once in a while as we plan to link to the other roleplaying/creative writing resources we believe might be helpful!

Some Basic Roleplay Terms and Their Meanings[edit | edit source]

ARG
Alternate Reality Game. Sometimes referred to as a networked narrative or chaotic fiction, usually involves multiple players & elements that exist outside of the game world. Waking Titan was an ARG that was related to NMS produced by Alice & Smith.
BACKSTORY
The history of a character that is often revealed through interaction with other characters via either RP or character profiles.
CANON
The accepted “official” elements of a fictional universe. Canon often begins with the official lore of the game. Some RP groups create their own extensive canonical framework for their members’ roleplay. “Headcannon” is used to describe how an individual player makes sense of the lore of the game for themselves.
GM/DM
Game Master (sometimes also Dungeon Master). The player who is running the game or plot for other players.
IC/OOC
Designates ‘in character” or “out of character” so what is often called the Fourth Wall isn’t broken. There is a clear delineation between the character’s and the player’s action/statements. Related terms are OOG (out of game) and IG (in game) to designate actions in or out of the game world.
LORE
The stories of the game. This can include the main storyline as well as side stories that are part of the actual game itself. Most often, lore is something that is observed as canon for roleplayers, even when they use that lore to spin off their own stories.
NMSRP
No Man’s Sky RP. Often a useful shorthand or hashtag that can be used in offering up or finding RP on game-related sites.
OC
Original Character created by the player/writer. This character is as unique as your imagination.
PLOT
A plot is the storyline of a roleplay story or adventure. Sometimes this can be created as the gameplay occurs or it can be guided by a preexisting set of points designed by a GM. Plots are generally more narrative driven in online roleplay than traditional tabletop RP, but sometimes dice, stats, and other random modifiers can be used if the plot creator chooses.
RP
RP refers to roleplay. An RPer is a roleplayer. RP can occur either IG or OOG. It can also be an OPEN RP or a CLOSED RP. Open RP is free for anyone to join in if they want to add to the story. Closed RP is closed to outside players without invitation.

Circle16 exists for roleplaying, storytelling & No Man's Sky gameplay together. We are here to have fun. To this end, we have a very low drama threshold. Causing unnecessary headaches in any context will not be tolerated. Swearing is fine within reason. Abusive or hate speech is not allowed. Basically any sort of "isms" will likely end up with their user being shown the door without prior warning. Because our group sometimes may deal with mature subject matter and dark/disturbing horror themes we limit our membership to adults 18+. We not only expect you to actually be an adult, but we expect you to behave like a mature, decent human being. Hopefully that is still a pretty low bar for most of us.

Short version: BE A GROWNUP & ABIDE BY WHEATON'S LAW