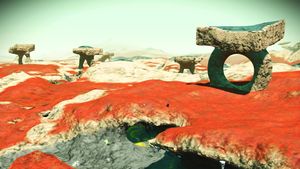 This planet is a vast wasteland that has little to recommend it. It doesn’t even have the distinction of being barren; it's shallow pools, fed by subterranean warm springs (bringing the water to a balmy 9 °C), are able to support minimal levels of vegetation, and it's drab, red and gray surface hosts a single species of flora: the Luceleum Icilisum, or “isolation fern,” the roots of which render the shallow soil of the planet inhospitable to the rich Thamium9 gardens found on most barren worlds.

This combination of elements makes Cirquadran one of the more useless planets in the Hub ... though the prevalence of unnaturally-formed, massive, ring-shaped lithic formations suggests someone once considered this a world worth visiting. (Ironically, initial scans refer to it as a “Forest Planet,” even though the same scans reveal the flora to be “deficient” and there isn't a single tree to be found.)

A few scattered bases support the planet’s low population, including Flying Monolith Tower, near which can be found a crashed B-Class Okonezaka S24 Hauler, and Lidani Base—which does have the distinction of featuring an S-Class pistol (the “Casting of Abwesseni-Sefo”) with +66% mining and +45% scanning capabilities. 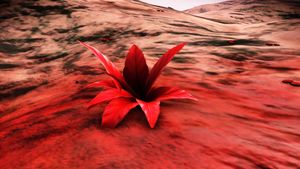