From No Man's Sky Wiki
(Redirected from Colossus)
Jump to: navigation, search
The subject of this article is from the Beyond update.
The information from this article is up-to-date as of 27 November, 2019. 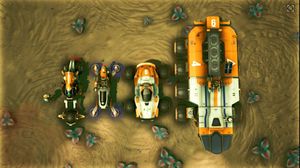 Exocraft are planetary exploration vehicles which, with the right technology, can locate specific Points of Interest, mine basic resources or engage in combat with Sentinels and some fauna.

All Exocraft keep their inventories and installed tech when summoned, even on different planets, systems, and across galaxies.

Normally, the player can only summon an Exocraft if it is not more than 750u away from the desired summoning location. However, building an Exocraft Summoning Station on a planet removes the distance condition, allowing the player to summon any owned Exocraft to their position from any other location on that planet.

Exocraft can be customized in appearance at their respective summoning stations using the orange panel. Options include paint colours, decals and boost particle colour. 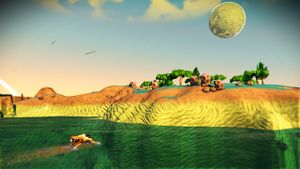 The smallest and lightest Exocraft is the Nomad. What it may lack in cargo space (the vehicle only has 16 slots), this hovercraft makes up for in speed, agility and its ability to glide over water.

The Nomad has an Exocraft Acceleration Module pre-built. 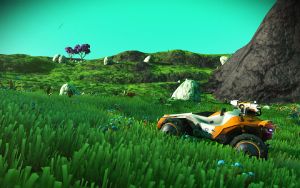 The Roamer in action.

The mid-range Exocraft is the Roamer, a great all-rounder with 28 slots which is capable of quickly crossing rugged terrain and adapting to most situations including underwater operations. The geobay blueprint for the Roamer can be unlocked at the Base Computer via the Base Computer Archives mission, allowing players to obtain an Exocraft without building an Exocraft Terminal.

The Colossus is the largest Exocraft. This lumbering behemoth offers an enormous cargo hold (42 slots in total), perfect for those looking to harvest resources.

The Colossus has an Exocraft Mining Laser pre-built.

Due to its weak engine and general lack of grip, it was often regarded as a mobile cargo unit. To amend this problem and make it a proper space truck the Colossus received an update in NEXT, giving it more speed and agility (its base speed was augmented even further in Update 1.63). With the free calling of all ships and possesion without a freighter, it also lost its value as a cargo unit. Thus the update kept it relevant.

The Pilgrim, a vehicle with 16 slots which comes with an Exocraft Acceleration Module pre-installed, is the only two-wheeled member of the Exocraft family. With full upgrades in place, it is the fastest of any Exocraft. It is the most land-based member of the exocraft family, having a much longer boost and being able to take huge leaps, but crawling while in water. 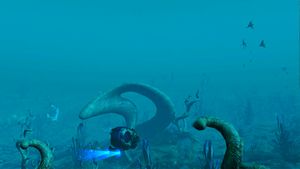 The Nautilon is a submersible vehicle that allows underwater navigation, combat and mining. It can be summoned to any ocean on the planet, as well as docked at underwater buildings. 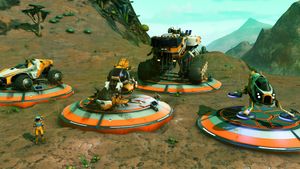 All Exocraft Geobay blueprints may be obtained at the Construction Research Station.

After constructing an Exocraft Terminal, acquire the Roamer, Nomad, and Colossus by hiring a Vy'keen Technician for your planetary (or freighter) base and completing a new series of missions. You can place a Geobay on any planet. Doing so will summon the corresponding Exocraft.

The Pilgrim Geobay blueprint can only be purchased from the Construction Research Station for 10 Salvaged Technology, the same applies to the Exocraft Summoning Station blueprint.

The Nautilon Chamber is available as part of the Dreams of the Deep mission. If the Nautilon is obtained with the Construction Research Station, then the blueprint for the Hydrothermal Fuel Cell must be obtained from a Manufacturing Facility, or an Operations Centre.