From No Man's Sky Wiki
(Redirected from Community portal)
Jump to: navigation, search
The subject of this article is from the Desolation update.
The information from this article is up-to-date as of 22 September, 2020. 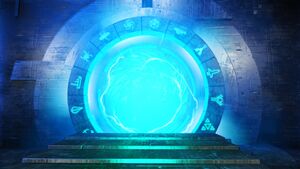 Portals are structures in No Man's Sky that allow for quick travel between worlds and entire regions of space.

A Portal is a point of interest in No Man's Sky and exactly one can be found on all celestial bodies of a star system, like planets or their moons. Portals can be activated and used to quickly travel between planets of a star system, star systems of a region or entire regions within the same galaxy.

The ability to activate a portal is taught to the player in the Artemis Path storyline in the A Leap in the Dark quest and doesn't need the entirety of all sixteen glyphs to be used. All glyphs can be found within Traveller Graves beforehand and subsequently used to travel anywhere inside the galaxy. 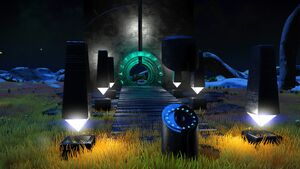 Portals are ancient structures that are all identical in appearance. They have a long cross-shaped platform on the ground that is flanked by floating pillars. On top of this platform stands a tall, slab-like structure with a split down its centre and with an opening at the base that allows beings to pass through it once it is activated. The tunnel has a ring that is covered in the portal glyphs, similar to the chevrons on a stargate. On both sides leading to the tunnel are minor stairs with one end having a submerged control panel that will come out of the ground once an entity enters its vicinity.

The most expedient method for finding the portal of a celestial body is to use another portal with the new planet’s address and to build a beacon at the target location to find it later. To help in this task it is advised to at least claim one homebase at another portal and to use it as a personal portal hub.

To find a first or later portal one can use a monolith. The most reliable way is to acquire an Exocraft and install Exocraft Signal Booster Upgrade Tau. Another way is to purchase a Planetary Chart (ancient artifact site) from Cartographer on a Space Station. Overall, monoliths only reveal the portal of their own celestial body. Repeated tries on the same planet will not yield other portal locations and are fruitless.

Locating a Monolith with the Planetary Chart:

Locating a Monolith with an Exocraft Scanner:

Locating the Portal with a Monolith:

Table of correspondence for Glyphs:[edit source] 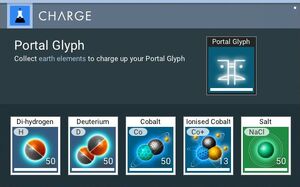 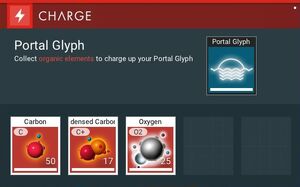 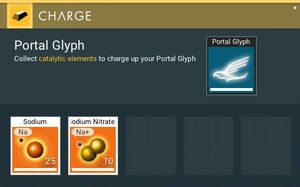 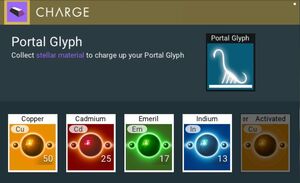 A portal's control terminal needs to be charged before the portal can be activated and used. Approaching an uncharged portal from the correct side will cause its terminal to raise from the ground. Each potential glyph is represented by one of sixteen buttons. These buttons do not reflect a user's glyphs and have to be charged regardless of the target address using them or not. A user does not need to have all glyphs to use a portal!

Accessing the terminal of a charged portal will display the portal's menu. It has three options: "Activate Portal", "Request this planet's address", and "Leave". Choosing the first option opens a keypad of the sixteen glyphs. Using the keypad one can enter another portal's 12-digit address. After all twelve glyphs are input the portal will activate and either report an error if the address is impossible or on the edge of the known galaxy or activate normally. Passing through the portal will then deliver the user to the destination that was chosen or a nearby random star if impossible.

One may pass through the portal and return, then enter a new destination and pass through and return for an unlimited number of times without it losing its charge. Portals do lose their charge only upon a complete reseed of the galaxy or a reset of the savegame. Once a portal is charged it is only charged for the user and remains so forever even if one quits the game or leaves the star system with any means other than the portal. 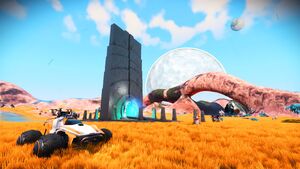 An activated portal leads directly to the portal at the address that was entered. The starship will be waiting next to the portal as well. Regardless of the actions after the transport, the portal will remain open until one travels back through it. One can save and even exit the game and the portal will remain open. It is not only impossible to enter a different address in an open portal from the target side, but for all portals in the entire target system. The terminal will remain underground for all planets until the player goes back to the starting system. Further limitations of the target system are, which will show a Portal Interference message to the player:

The only arbitrary way for one-way travel is to teleport to other players either randomly or in the friendlist and to register with the local station teleport network. This allows the same actions as portals did before Update 1.58. All other legitimate avenues of one-way travel are currently closed aside of black holes, which are one way and one direction only, towards the centre.

As stated by Hello Games in an experimental update thread on Steam, "most" of these changes and limitations of permanent portal travel are their intention. It can be argued that they might regret the severity of some of these as the systems related to the Community Research demanded a quick implementation of the features.

With the changes to signal boosters in NEXT, finding a claimable base on an expedition took a lot more effort and dedication as any habitable structure could interfere with finding one. It was part of the shelter group. Since Beyond HG has removed the option to locate a forward base after they also removed the general idea of permanent portal travel in NEXT prior to it. This might be an oversight and unintended consequence of their new feature implementation. The removal of portal travel was not.

Due to the new feature of planetary coordinates for the spaceship, sharing forward base coordinates between players is now a necessity for coordinated efforts of distant exploration. Finding one now comes down to sheer luck.

On full or partial ocean worlds travellers are advised to use the Nomad to traverse water more easily. Any down or plain world can safely be traversed using the Roamer which offers a longer speed boost and more stability.

Every portal has its own unique Portal address. The address is a sequence of twelve glyphs arranged so that one glyph represents the planet, three represent the star system, and eight represent the region. A portal's address can be learned by requesting it from a charged portal or by conversion from Galactic Coordinates. It is necessary to input a portal address at a charged portal to activate the portal for travel.

Portal addresses break down into five parts. The first glyph is the Planet Index. The second, third, and fourth glyphs combine into the Star System Index. The remaining glyphs are used to identify the region (i.e. define X, Y, and Z locations) in the galaxy. It can be visualized as follows:

Weekend Missions provide directions to a random portal in the current system.

First announced during the 2014 Game Awards, portals have the ability to take the player to a random part of the galaxy. In the pre-release version of the game, the only planets known to have portals were Gorogohl and Yaasrij.

They normally appear as an individual portal, but some have been discovered with multiple smaller portals surrounding a larger one.

The differences between Teleporters & Portals and how to find them