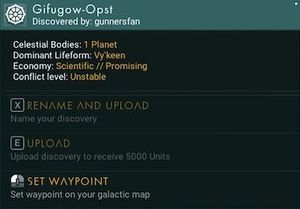 "Unstable" Conflict level in a system

Conflict Levels are a concept that was introduced with the Atlas Rises update.

The conflict level of a system indicates the amount of space battles that will be experienced while in that system. It can be viewed on the discovery screen for visited systems, but the player requires the Conflict Scanner to see the conflict level of unexplored systems.

If the player has a Conflict Scanner, the Galactic Map will show the description for any system's conflict level, next to a sword icon. The number next to the sword represents the conflict level for that system: 1 for low, 2 for medium, and 3 for high.

The higher the conflict level in a system, the more pirate attacks (hostile sub-space scan) a player will experience while in that system.

Although the descriptions can change, there is no known difference between systems in the same conflict level tier.