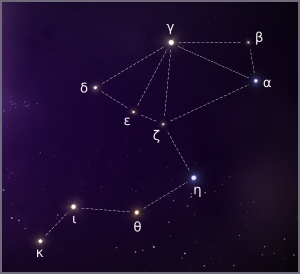 A Constellation is a group of stars.

A constellation (also known as a sub-region) is a group of stars that make an imaginary shape in the night sky. They are usually named after mythological characters, people, animals and objects. In different parts of the world, people have made up different shapes out of the same groups of bright stars. It is like a game of connecting the dots.

In the past, creating imaginary images out of stars became useful for navigating at night and for keeping track of the seasons. Because all the stars are at different distances, the constellations would look totally different to inhabitants of another planet orbiting another star. [1]

While there is no official recognition of constellations in No Man's Sky, many players have created and documented their own. Examples are Dandelion, the Nesdorinux Project, and Hova's Sword.