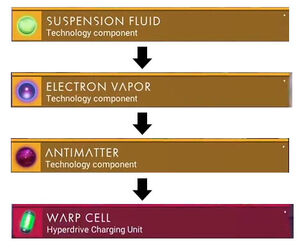 Crafting is one of the four foundation pillars of No Man's Sky.

The player can craft technology upgrades for their exosuit, starships, Multi-tool, Exocraft, and Freighter using blueprints found throughout the universe. The player can purchase blueprints in space stations, find them in Observatories and Manufacturing Facilities, or they are awarded by NPCs.

The player can also craft products, which are generally more valuable items than resources. Products can be used in:

Certain products and upgrades can be dismantled (i.e. broken down into basic elements with a 25-50% recovery rate). Crafting items might allow a player to save space by filling one slot with a crafted object instead of having to use three slots for the resources involved. It will also allow a player to recycle components while building upgrades, rather than simply discarding or selling the older components. When an upgrade is dismantled, the raw materials returned are roughly half the totals used to originally craft the item.

Product Tables provides a full list in table form of all crafting items, what they are used for, where you can find / buy them or their blueprints, and what you need to craft or refine them.