Crashed Freighter is a Point of Interest. 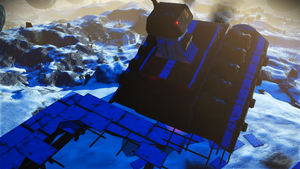 Crashed Freighter is a Shelter type of planetary Point of Interest.

Crashed freighters can be located after solving a puzzle at a Transmission Tower or by normal exploration. Through the use of tools such as the Terrain Manipulator, Plasma Launcher, or Geology Cannon, you can uncover storage units that contain Nanite Clusters or units. Each crashed freighter has a Distress Beacon that will grant a blueprint and start the secondary mission. Note that the containers can emit deadly radiation that goes past any protection measures.

They can often be spotted on the surface without any hints due to their giant silhouette and appear in average frequency.