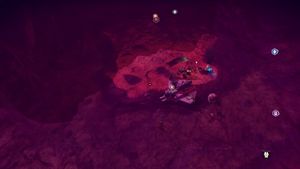 Screenshot of a Crashed Ship waypoint

Crashed Ships are one of various planetary Points of Interest.

Crashed Ships spawn randomly on planets, and can have more or fewer inventory slots than the player's current ship. The player can repair the ship and take it with them, as well as interact with the ship's Distress Beacon which will give the player a random reward dependent on the player's choice of two possible actions, including units, Nanite Clusters, a standing point with the race owning the system, and rarely a blueprint. There is always Damaged Machinery nearby as well, providing 30 Nanite Clusters.

Crashed Ships can be located in a variety of ways:

Crashed Ships can have more inventory slots than the player's current ship. This allows a player to switch their ship repeatedly to gain a ship with the maximum amount of inventory slots without paying money. The strategy consists of marking many Transmission Towers with a Signal Scanner, then flying to the towers and solving all of their sequences before flying to the crash sites. This seems to have been removed with the last update as you can no longer search for Transmission Towers.

It is possible for the Signal Scanner to mark a Transmission Tower again after visiting it (therefore removing the mark), which is also possible with the Crashsite marker. With this method, the player does not need to leave the planet and therefore will not need to repair weapon systems, the Deflector Shield and the Hyperdrive except for the last ship the player will leave the planet with.

In order to fly the crashed ship after acquisition, the player must repair certain technology on the ship. At a minimum, the following must be repaired or the ship cannot take off.

Furthermore, the Launch Thruster must be fueled with 200x Plutonium.

If you prefer to keep your current ship, you can scavenge the resources from the crashed ship. First, switch ships without transferring, and deconstruct all the modules. Then transfer back to your old one, taking any desired materials with you and getting all your original things back.

Crashed ships can be destroyed with your ship weapons. This will gain you nanites and Tropheum at the cost of some standing with the species in charge of the system.