From No Man's Sky Wiki
(Redirected from Creature)
Jump to: navigation, search
The subject of this article is from the Visions update.
The information from this article is up-to-date as of 13 August, 2019. 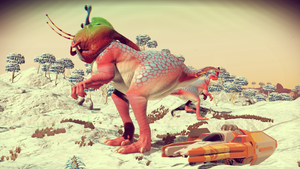 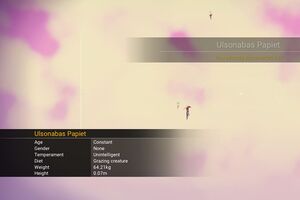 Their location can be easily identified on a scanner as red dots (new species), green dots (already scanned), or white dots (too distant to spawn yet). Most species also vocalize (with roars, "yells," squeals, etc). Fauna can be found anywhere on a planet, including in the air, although some planets will have no fauna or areas with no fauna.

Upon landing on a new planet or checking a planet in the Discovery Menu (Pause Menu), the density of fauna (or lack of fauna) on a planet can be checked.

This category is commonly referred to as "animals," which may or may not be technically correct. In Earth biology, "animal" refers to Kingdom Animalia, which the majority of No Man's Sky fauna do indeed seem to resemble.

For records on the largest and smallest fauna in the game, see Fauna Hall of Fame.

Fauna in No Man's Sky display 16 genders. Below is a list of all genders, and some possible meanings.

Fauna age in 10 different ways. Below is a list of all age categories, and some possible meanings.

Carnivorous and omnivorous species will be hostile to the player, and sometimes other fauna. Herbivorous species will display grazing animations, perhaps most noticeable with Rangifae (diplos) which lower their heads down to the ground with their long necks.

Some of these categories may seem redundant - for example, "Carnivore" and "Meat-eater," or "Herbivore" and "Grazing Creature." However, there could be slight distinctions between each option.

As a completely speculative example of possible distinctions, "Carnivore" may be the same as "obligate carnivore" in Earth biology, animals that strictly eat meat and nothing else. While "Meat-eater" may be the same as "facultative carnivore," animals that eat mostly meat, but may occasionally eat plants as well (or in the case of NMS, other...elements). "Herbivore" could apply to any animal which eats plants, while "Grazing Creature" might specifically requires grazing behaviour.

After scanning a species you are provided with information regarding "bait" which is used to tame creatures and take advantage of additional abilities.

Some baits are just for "pacification" of creatures and will make them friendly, similar to how you could feed them random amounts of isotopes in previous updates. This is now done with "nutrient pellets" as the lowest "tier" bait.

Higher tier baits may enable to ability to ride medium-large creatures. (This does include flying creatures of medium/large size) This same tier of bait allows the ability of harvesting/milking creatures.

The overall size of a species is determined by two factors: its height (or length) and its weight. As weight has no direct effect on the game and seems to give unusual values at times (such as butterflies being extremely dense), height is usually considered the more important characteristic.

Height is a measurement of how tall a species is. Different genera have different size limits, primarily governed by their ecosystem (for example, there are no flying or aquatic fauna above 4m, and certainly none above 8m). So far, no creatures above 8.43m have been confirmed. Eight (8) meters can be considered the "soft limit," as it seems no species will grow much taller than that. The smallest known species is 0.07m. Note that with the NEXT release, the hundredths digit was dropped, providing a size range of 8.4m - 0.1m. As a result, the largest and smallest known species from Atlas Rises will never officially be exceeded.

Weight is a measurement of how heavy a species is. It's difficult to say how it's determined, as the smallest species found so far is as heavy as some species ~14 times their size. 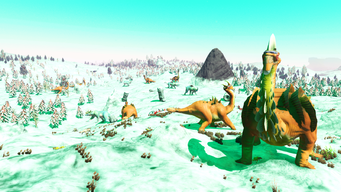 At a certain size, a species will shake the ground with its footsteps (with the exception of hovering fauna, like winged Grunts or hovering Beetles). Such species are referred to as megafauna. Only certain fauna can become megafauna - aquatic species, birds, and butterflies have a smaller "maximum size" than other types of fauna, and cannot grow to a true "megafauna size."

"Megafauna" is not a term used by the game, but the term is frequently used by the playerbase.

Fauna can be found in four (technically five) ecosystems.

The day and night cycle affects the spawning of fauna. Different species will behave differently based on the time of day.

Nocturnal species are active strictly at night. Diurnal is the opposite, with these species only being found during the day. Many species are mostly nocturnal or mostly diurnal, being more active during a certain time but still present during the rest of the day. Creatures won't suddenly disappear if time cycles out of their period of activity, but they will start/stop spawning new ones or increase/decrease their spawning frequency.

The following information is based on pre-Foundation datamining, but it appears to still be accurate. So far, it appears that no updates have significantly changed how fauna spawning and behaviour work, aside from increasing the maximum size of fauna.

Fauna can display both predatory and defensive behaviours.

Predatory behaviour can be directed at the player or other fauna. There are three main types of predators, and two other categories of fauna behaviour.

Fauna also display Behaviour ("Temperament" prior to NEXT), listed in the Discovery Menu. There are 37 Behaviours divided into 5 subcategories. At this time, it's unclear if specific Behaviours within a category have any effect on the behaviour of the fauna, or if all subcategories behave essentially the same.

"Generic" behaviours most likely apply to fauna which display neither predatory nor defensive behaviour, such as Ictaloris (fish) or Oxyacta (wraiths).

As Predators and Player Predators have distinct temperaments, this list can be used to determined whether or not a specific species will attack other fauna or only the player.

The broad category of fauna is further divided into three smaller categories based on Earth taxonomy. From most to least broad, these categories are Family, Genus,, and Species. The entire game has a total of 23 genera, while an individual family or species never appears on more than one planet.

Using the information below the player can more accurately name their planet's animals.

(Note: In Earth biology, "Family" is a more broad category than "Genus.")

Unlike "Genus" and "Species," "Family" is not an actual term used by the game code, but nonetheless a useful term to describe the identical name parts between some species.

The family of a species can be identified by the second half of its scientific name. For example, the Rigatori Niplatea species would belong to the Niplatea family.

Genus (pl. genera) is a characteristic of fauna in No Man's Sky. Unlike the procedurally-generated Family characteristic, the game's code references the Genus characteristic in determining where a species spawns. For example, the game will always spawn one butterfly species (genus Rhopalocera) and two predatory T-Rex species (genus Tyranocae) on "prehistoric planets." A genus is also restricted to one (or in some cases two) ecosystems, ie, "Aquatic" or "Subterranean."

These groups appear to be isolated to one planet - a species or family will never appear on two different planets. The name for each creature contains two procedurally-generated parts: a unique Species name (the first half) and a Family name (the second half).

Families in No Man's Sky are much more broad than they are in Earth biology, but they do share some characteristics. For example, one family may all be water dwellers, and others seem to all be four-legged terrestrial creatures. Unlike "Genus" and "Species," "Family" is not an actual term used by the game code, but nonetheless a useful term to describe the identical name parts between some species.

A species can be identified from other members of the same family be the first half of its scientific name. For example, the Rigatori Niplatea species would belong to the rigatori species.

In Earth taxonomy, the 'species' part of classification is always lower case. 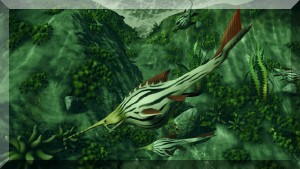 Using the information on family, genus, and species above, one can classify the Rigatori Nipatea as Niplatea (family), Rangifae (genus), and finally rigatori (species). The specific species, when being talked about, would then be simply referred to as "R. rigatori." This is called the scientific name, or the binomial nomenclature.

To help further explain this process, here are a few more examples of classifying a species.

Divergent Species are a type of species in No Man's Sky which, when scanned, do not count towards the Total Number of Species Discovered on the planet. These creatures are believed to be a glitch of the original scanned fauna, creating a different version of the original species. They will have the same statistics and appearance as the species it originated from, only differing in preferred bait and species name, although opposing genders displayed in the Discoveries tab may give the illusion of one having a different height, weight, or appearance. In rare circumstances, one may have a slightly different coloration or head ornamentation. It is currently unknown what triggers one to appear, although exploring in multiplayer groups seems to increase their frequency.