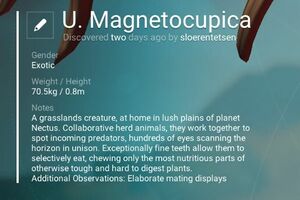 The Discovery Menu section on a Fauna discovery page is composed of several text sections describing a creature. These sections include:

This page indexes the Notes sentences and will provide searches to show fauna pages that contain those sentences. The Additional Observations section is also indexed.

The names are procedurally generated with certain customized terms (such as the name of the planet) being inserted in the proper spot.

There are a number of free OCR apps that can be used to capture data from a screen, then turn it into text which can be easily pasted into a wiki page. They save a lot of typing.

A list of eight recommended free apps can be found here.