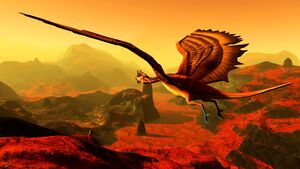 Cycromys is a genus of fauna in No Man's Sky. Although the game code refers to them as "flying lizards" (similar to Oxyacta, the "flying snakes"), players more often call them "dragons" or "large birds." This flying-fauna genus consists of species with two wings (sometimes segmented but still acting like two) which are always much larger than other winged flying species.

Unfortunately, as these species fly faster than the Traveler can go on foot (even while bash-boosting), the only way to observe them closely is to shoot them down or use Photo Mode. You get a much better sense of their massive size (relative to other birds) when they aren't flying overhead. 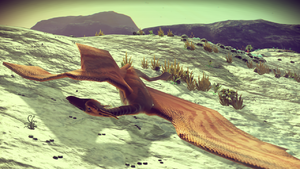 Cycromys has two main variants: hawk-like and exotic. Though very similar, the hawk-like species tend to be slightly smaller, and have heads which resemble hawks. They are always feathered, while exotic Cycromys species are only sometimes feathered.