Derelict Freighter is a space encounter. 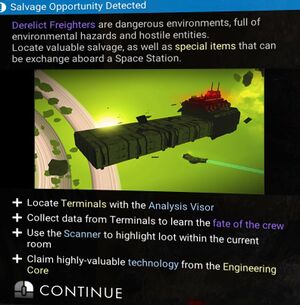 Derelict Freighter is a space encounter in the No Man's Sky universe. Derelict freighters are procedurally generated, with no two interiors the same.

It can be forced to appear by using an Emergency Broadcast Receiver. Receivers can be bought from the Scrap Dealer aboard the Space Station (the price increases with each purchase, but resets each day - 5m, 10m, 20m, & caps at 30m). After completing at least one freighter, a receiver can be obtained for free from Iteration Helios once per week.

You can also have a chance to force its appearance with an Anomaly Detector, which you will very rarely find while mining asteroids.

Each derelict freighter has a unique story to tell. Uncover hints about each crew member’s fate by retrieving ship logs and personal effects, and ultimately gain access to the captain’s log for insight into the vessel’s final hours.

WARNING: As of Patch 2.61, many derelict freighters are incompletable due to impassable wreckage. It is inadvisable to use an Emergency Broadcast Receiver until this is patched.

Derelict freighters appear as destroyed ships, adrift in space and surrounded by damaged ship parts. They can have the appearance of several types of freighter.

They have four Landing Pads to allow for tackling them in multiplayer.

Players must board the freighter, which has been sealed shut, to collect information and loot. Interacting with the airlock terminal computer will unseal the freighter for exploration. You will be unable to use your jetpack and movement will be slowed down.

The freighter will be cold and can be warmed up using heaters that you turn on. Take Dioxite or Oxygen with you for recharging your life support, and Sodium for environmental protection. You will also get three Repair Kits and a small amount of Sodium and Oxygen from the airlock computer. Derelict freighters have small containers floating around with Sodium, Oxygen, Ferrite and Condensed Carbon.

Uncovering the freighters' secrets won’t be easy, as these derelicts are full of danger. As the crew fled, systems failed: the lights are off, life support and gravity are offline, and the security AI has gone haywire. Some freighters have been infested with a sinister alien presence. These enemies are currently known as One-Eyed Roach / Green Jellyfish / Rogue AI. 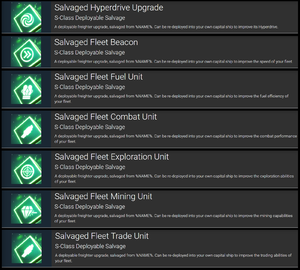 You must collect Security Credentials from particular readable logs that are lying around. You must then find three terminals in the various rooms of the freighter. The first will give you a Crew Manifest item. The second will give the Captain's Log item in return for the security credentials from earlier. The third and final terminal will give you a choice of: nanites (500-600), Cargo Bulkhead (an item that allows you to add a slot to your freighter general or tech inventory) or Salvaged Fleet Unit (a random installable upgrade module for your freighter that boosts stats on frigate missions or Freighter Hyperdrive stats).

You can sell your Crew Manifest and Captain's Log to either the Guild Envoy or the Scrap Dealer on the Space Station. Rewards randomly switch between nanites and standing with a dominant race.

Replaying a Derelict Freighter in the same star system will result in the same layout inside. Whatever class of Salvaged Fleet Unit you were awarded before, it will be the same class again, but potentially a different item. They can award bonuses to: Freighter Hyperdrive OR to all of the frigate expeditions: Speed / Fuel Efficiency / Combat / Exploration / Mining / Trade.

Zones (rooms) are created in a procedural fashion. They are named based on type of room, then have a letter and double digit number. This is the marker for which procedural element is being used.. E.g. Medical Unit - E37 will be different to Medical Unit H21.

To log your own findings, visit: Derelict Freighter Loot Logs.

To log your own findings, visit: Derelict Freighter Loot Logs.

Sneaking by the Infestations & using the Incinerator Flamethrower