From No Man's Sky Wiki
(Redirected from Drogradur NO425)
Jump to: navigation, search
The subject of this article is from the Pathfinder update.
The information from this article is up-to-date as of 10 August, 2017.

The former capital planet for the Galactic Hub, Drogradur NO425 (or just Drogadur for short) was once a lush/tropical planet with ~6m diplos, among other, more common fauna species. Terrain was mostly grassland, along with mountains, beaches, and shallow bodies of water.

There were at least four habitable bases here, most of which were marked by Communications Stations (at least on PS4).

After Atlas Rises altered the biome generation, Drogadur became a frozen world of pine forests and pink skies, with storms that would make the planet even colder than usual. 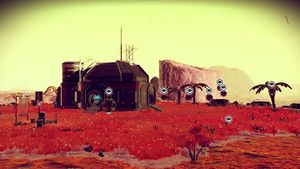