Dudenbeaumodeme was a planet in the Starfall system.

The planet Dudenbeaumodeme was one of the most well-known planets for players who explore the No Man's Sky universe. It became famous in NMS lore when player Steam-bot decided he wanted to walk around the entire planet.

Steam-bot describes from the article by Patricia Hernandez: “I was still obsessed with the game (and had been since it was first announced) and wasn’t ready to stop playing.” Steam-bot goes on to note: “I really wanted to add something fun and positive to the conversation and show people (including Hello Games) that there were still people that believed in this game and weren't ready to give up on it,”. He finished this feat on a planet that has a hazy atmosphere, frequent storms and huge flat dropping cliffs. The system where planet Dudenbeaumodeme is located eventually became known as the The Pilgrim Star (on the PC version) and also became a primary destination on Pahefu's app Pilgrim's Star Path.

At one time it was the location of the Pilgrims Base Camp base where comm pods were placed describing Steam-bot's journey, and later entries in the Dudenbeaumodeme lore include King James Hovas base. There was also a comms on Mount Hova as well as info on NMS Survival Guru walking around the entire planet in survival mode with no hud during his Shadow of a Pilgrim series.

Here's a complete compilation of Steam-bot's logs describing his pilgrimage across the planet: The Pilgrim's Path 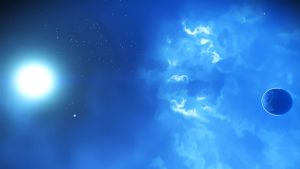 White and orange upon landing, although looks blue upon flight to the planet. Long dropping cliffs with dark drawn lines. Frozen rivers. 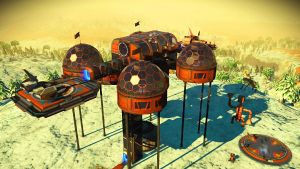 Pilgrims Base Camp: Base built by NMS Survival Guru and is available in both normal and survival mode.

A water planet on survival mode.