EPIC Arsenal is a star system in No Man's Sky.

EPIC Arsenal is a star system in the No Man's Sky universe.

This system is part of the Empire of Pirates and Independent Cartels (EPIC).

This system has three planets and three moons. 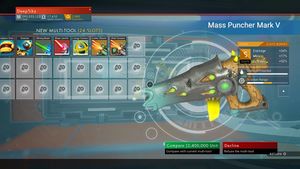 S Class (24 slot) Alien Multitool found in the Space station, after reloading on the Planet with two moons.