EPM Hoth Baraks is a Base in No Man's Sky.

EPM Hoth Baraks is a Base in the Xbox Universe of No Man's Sky.

It is considered a vital base on the capital planet Hoth (EPM) of the civilization Empire of Phantomium Marxium.

The base features four Landing Pads and a Galactic Trade Terminal. In terms of portable technology, it houses a Signal Booster and a Save Point. The Base itself is a monitoring station for traffic in the Star system. It's signature is the "EPM" sign right in front of the Landing Pads, facing towards the ocean. 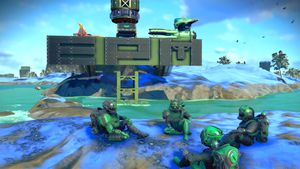 The four members, as they were on the First Negotiation Day.

This is the base where the four Founders of the Empire met to discuss important affairs regarding the EPM's future. This event occurred on the 25th of April, 2019 and is remembered by the name First Negotiation Day.