Eccanit is the gamma-intensive moon of Ritanas Unkyo in the star system Olmasa-Naz on PC Version No Man's Sky universe. This article is under construction. 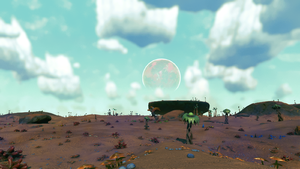 This moon has the floating islands terrain archetype.

Eccanit is a moon that has fairly smooth terrain with some rough patches here and there. A few hills and mountains relative to the moon's size can be found. However, its defining feature are its floating islands. These large pieces of land levitate above the ground, seemingly defying the laws of physics.

There are relatively high amounts of radiation throughout the planet but it is always kept in check. Radiation spikes are almost non-existent despite occasional bombardment from Olmasa-Naz's powerful flares.

There are areas of the moon where one can have an excellent view of the system's three massive planets. The aggressive Sentinel presence makes this a nice place to train one's combat prowess. Gravitino Balls can be found here en masse, usually in large clusters. Picking just one results in a level 3 wanted level, resulting in some combat rowdiness.

Though most of the moon's fauna is docile, two Tyranocae species stand out. Both are hostile to anything they consider food.

On first discovery, Eccanit was planned to be destroyed due to the aggressive sentinel presence. However, the Eyfert Khannate found a way on how to properly use this moon to its fullest.

Eccanit is a moon that is very heavily militarized. It is the Eyfert Khannate's ultimate war factory and research center. It serves two main purposes - to protect the beloved Olmasa-Naz system from harm and to make the Eyfert Khannate a force to be reckoned with in terms of military might and technological advancements. The moon is inhabited only by the best the civilization has to offer. There are no mainstream army soldier here - every military personnel here is a certified member of the Elite Army. The best and most righteous scientific minds conduct research here to the betterment of civilization. While Stlastry is already quite a powerful system, this one single moon completely overshadows it in terms of sheer military might and research prowess.

A Negyarm Cannon superweapon is being constructed here. It launches massive aerodynamic pellets at near the speed of light. On explosion, it rips the very fabric of space and time, opening up a sub-space for a short period of time. The explosion is stealthy, as sound and any form of detection is sucked into the sub-space, making this an excellent tactical asset, especially for surgical strikes at the very heart of the enemy. Starships with extremely advanced phase jumping technologies can enter the sub-space and near-instantaneously teleport to the site of the explosion. Unlike the GRBO (Gamma-Ray Burst Ordinance) which causes extreme destruction, this superweapon is used for tactical strikes against the enemy, breaking them from within.