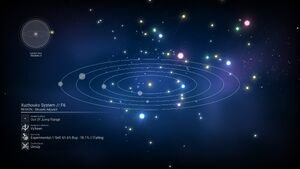 Using an Economy Scanner to check nearby economies

Every star system in No Man's Sky has its own Economy rating. It doesn't matter what Faction controls the system.

There are seven types of economy and every system has one. The type of economy that a system has will not affect its economic status nor its S/B stats. Each system also has its own "icon" depending on its economy type:

Trade routes are generally categorized into three or four-way routes between systems. Resources replenish slowly and the fulfilled demand at a target lowers the price for consecutive sales. Compared to planetary trade ports, the local space station usually offers the worst prices, but has its own supply and demand in return.

An in-depth spreadsheet with data about trading on star systems of different economy types and its effect in the price of specific products.[1]