From No Man's Sky Wiki
Jump to: navigation, search
The subject of this article is from the Crossplay update.
The information from this article is is up-to-date as of 16 July, 2020.
This article was catalogued by the Grand Conjunction of Aligned Systems.

Eden Worlds are a specialized class of planet or moon. 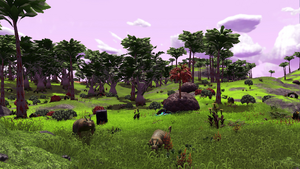 Groenn-Gras, an Eden World with a Lush biome.

Eden Worlds are a specialized class of planet or moon that meet the following requirements. These requirements are defined by the Grand Conjunction's Project Eden by building upon earlier definitions created by The Arcadia Project.

To be classed as an Eden World different factors of a planet or moon must be looked at, in the order listed below. Eden Worlds can be divided into two classifications depending on how close they are to being ideal: Near-Eden or Eden.

The primary difference with this method of classifying perfect worlds from previous methods is that the criteria is stricter overall, yet applied evenly with regard to planetary biomes, allowing for a greater variety of worlds to be classified as perfect for habitation. By providing more objective criteria for classification, this version leaves less gray area for determination. Having stricter standards means that far fewer worlds could be classified as Eden Worlds, making them the rare gems that truly perfect worlds deserve to be. 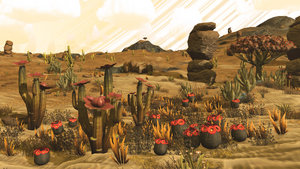 Sandr-Mani, a Near-Eden World with a Barren biome and moderate weather.

Weather severity can be checked by referencing the weather's name on the related biome page.

Lush worlds are a special case when determining weather as a factor. Due to how otherwise habitable lush worlds are, consider their weather severity as one level lower when checking them on the chart above. This means a lush world can have any level severity of weather and still be classified as a Near-Eden world, or up to normal weather and still be classified as an Eden world, provided that they meet all other criteria. 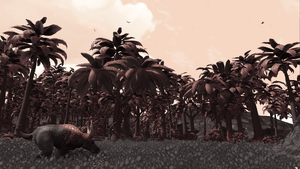 Myrkr-Skogr, the first Lush-like Mega Exotic world to be classified as an Eden World.

Mega Exotic worlds with a Lush-like environment are another special case as each of their weather types can be found at any level of severity. For that reason, Near-Eden mega exotic worlds can be any level of weather severity, while Eden mega exotic worlds cannot be extreme. Extreme weather can be easily checked for by exiting your starship and seeing if the weather's name is listed in red. This makes their determination with regard to weather identical to Lush worlds, which is reasonable given that qualifying Mega Exotic worlds are nearly identical to Lush worlds in most ways, except for their odd light and atmospheric colouring.

A planet or moon's environment must be Earth-like and fit for easy habitation and colonization to qualify as an Eden World. This rules out any worlds with extreme toxicity or radiation, continual extreme heat, or those that do not have an atmosphere. For this reason Toxic, Irradiated, Scorched, and Dead worlds can never be classified as Eden worlds as their environments are always far too hazardous.

Barren and Frozen worlds can conceivably be defined as Eden Worlds provided they fully meet the remaining criteria, as their weather is not as extreme as the more hazardous biomes previously mentioned. However these two biomes are usually downgraded to Near-Eden status due to their relative lack of flora.

With environment being such an important factor, most of the Eden worlds discovered are Lush ones, as day to day life is ideal on these worlds. 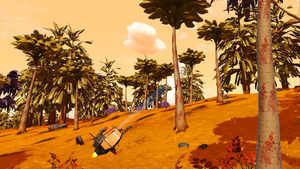 Sentinel drones can be found all across the universe and the level of sentinel activity on a world must be looked at in order to ensure the safety of those who choose to live on a potential Eden World.

In order for a planet or moon to be classified as an Eden world, sentinels must have a low activity level.

High sentinel activity on a world would downgrade it to Near-Eden status while having aggressive sentinels completely disqualifies a world. 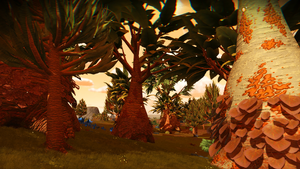 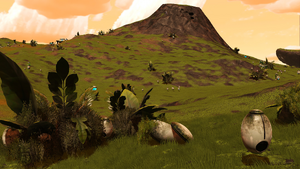 Hydro Garden Exotic worlds, like Flar-Skogr, have only been discovered as Near-Eden Worlds due to having low varieties of actual flora.

Flora level is important when determining the status of potential Eden Worlds. They should be a paradise, having a wide variety of flora, as well as a thick carpet of grass covering most of the landscape. Even Lush biomes with ideal weather can be rejected if they have no native plant life.

Eden Worlds should have extremely high amounts of unique flora species, dense vegetation such as forests, and thick grass. Note that this determination could be different than what the world's Flora level displays as when using a visor or in the Discoveries tab. Once enough data has been collected to get a statistical average for flora species on various worlds, this qualifying factor will be more objectively defined.

Worlds with a low number of flora species, or those that only have sporadic patches of ground cover are downgraded to Near-Eden status. This is the determining factor which limits most Frozen and Barren worlds to that of mere Near-Eden status rather than full Eden World status.

Worlds with no flora species are completely disqualified, as are those with minimal to no ground cover. 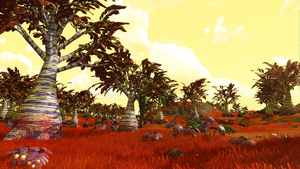 Eng-Blodh, a Near-Eden World with a Lush biome and dangerous predators.

Eden worlds should be true to their name and be home to a wide variety of creatures. The presence of fauna is not necessary for a world to be classified as a Near-Eden World.

While Eden Worlds require many species to be present, those aggressive towards Travellers should be never or almost never encountered, if present at all. Any world with frequently encountered predatory species would be downgraded to Near-Eden status. Please note that the actual frequency of encounters with any particular species is different than its listed rarity in the Discoveries tab.

In order to be considered an Eden world, a world must pass each of the factors listed above at the highest level of qualification. Those answering "No" to any of the Eden World criteria are downgraded to Near-Eden status. As these worlds are considered perfect, they need no further explanation on their world page other than being labeled as an Eden World.

In order to be considered a Near-Eden world, a world may only answer "No" to one or two of the Eden World criteria and must answer "Yes" to all Near-Eden World criteria. Consider it a "three-strike" rule. Those which do not meet these overall rquirements are disqualified from being able to be considered Near-Eden worlds. It is helpful to list the reasons why a world did not achieve full Eden status on its world page. A complete list of all possible reasons follow.

Worlds which answer "No" to any Near-Eden World criteria, or "No" to more than two Eden World criteria are disqualified from all consideration. It is helpful to list the reasons why a world did not qualify for either status on its world page, in order to assist others who may attempt to classify it in the future.

The words in bold for the following examples should be used on a Near-Eden world's documentation page to explain why it did not meet the standards of a full Eden world.