From No Man's Sky Wiki
(Redirected from Em)
Jump to: navigation, search

Emeril is a resource.

Emeril (Em) is a resource, which is a silver-black metal that emits low levels of radiation. It is a highly sought after element that's used in the construction of planetary outposts.

Such stellar material ends up forming deposits in the crust of local planets. Can be combined with other elements to create valuable alloys if formula is available.

Early on in the game it is a great source of units.

A chromatic metal, generated by fusion in the heart of a star.

Emeril is found on planets orbiting green stars, and can be placed in a Refiner to create purified Chromatic Metal for use in the manufacture of advanced technologies. 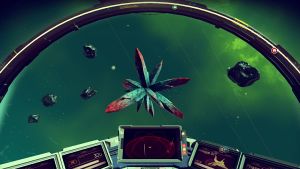 Emeril can be found on the surfaces of planets in green star systems, and in caves, as well as within some asteroids and crystals in space.

It can be mined with the Terrain Manipulator attachment for the Multi-tool.

It can also be collected by feeding the fauna on certain planets. After a short period of time, they may dig some up or generate the element by various bodily functions.

Emeril can be refined using a Refiner with the following ingredients:

Once the player has Medium Refiner/Large Refiner, they can use it to produce limitless Emeril:

Emeril is used as an ingredient for crafting the following products:

Emeril is used as an ingredient for refining the following products using a Refiner:

Emeril is not used as an ingredient for cooking using a Nutrient Processor.