From No Man's Sky Wiki
Jump to: navigation, search
The subject of this article is from the Origins update.
The information from this article is up-to-date as of 9 November, 2020.
This page fills the role of Embassy for the Empire of Phantomium Marxium Civilized space community.
The information found here represents a user-created civilization that is a creative addition to the game.

The Empire of Phantomium Marxium is a Civilized space community.

The current official flag of the EPM. 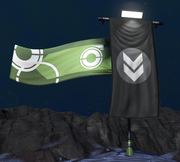 The registered flag of the EPM on the Federation Vexillology Department.

The Empire of Phantomium Marxium is a community of Xbox Travellers that moved from Euclid and are now settled in the Mokyharra Band and neighbouring regions of the Husalvangewi galaxy. Its aim is to assist all Xbox Travellers and the Xbox universe in general by organizing it via any means.

Being an Empire, the EPM is currently ruled by Emperor Jikomiko. Second in command is Viceroy blek18. Members of the EPM are to obey directives and orders issued by the former two, but are also obliged to follow the Articles presented below in the Directives & Laws section, which comprise the EPM's Constitution.

The following message is from the Emperor, at the moment of the EPM's Foundation: "All Travellers are welcome! Let's build A GREAT EMPIRE to unite all Xbox players!"

While the EPM ultimately desires to remain withdrawn from any conflict, it will not tolerate any provocation by anyone, whether another community or a single usurper.

The EPM's most important goal is to create a prosperous civilization with its core operations set in the Xbox universe of No Man's Sky. Even with the second relocation of the EPM's capital to the 70th Galaxy, its objective for industrialization and organization of the Xbox universe remains, influenced by all of its past achievements.

The EPM aims to undertake the task of industrialization itself, with every member being able to contribute.

After being banned from the UFT, the EPM also wishes to embrace and spread the freedom it gained whenever and wherever possible.

The EPM records all important events that have happened or are happening and have affected the EPM, as well as events that occurred before its foundation, on History of the EPM.

The following are projects that the EPM directly manages, or is a part of.

On the 3rd of August, 2019, Emperor Jikomiko announced the launching of the EPM's own military force called the Phantomial Space Force. The main goal of the PSF is to preserve peace and order within EPM space, and if need be, intervene in galactic affairs for the same preservation of peace and order on an intergalactic scale in the Xbox Universe.

The PSF has its own fighter, dubbed Phantomial FM1A "Vector Mk1" and is based on blueprints created by the early Phantomial Corporation, which itself is no longer considered a project since it has been scrapped.

Note: Credits go to eharris8484 (unassociated with the EPM) for actually finding the location of the fighter.

Organized and managed by EPM member SGT SLING, the New Legion of Multistellar Operations, NLMO for short is a non-profit organization within the EPM's jurisdiction. Its aim is to assist Travellers galaxy-wide with any kind of task (i.e. locating coordinates for ships, gathering and delivering agricultural supplies etc.). It was founded on the 15th of February, 2020.

Formed on the 20th of March 2020, the Phantomial Cosmonauts (abbreviated PhCosmo) is a group of dedicated explorers of the EPM which aim to breathe some life into the exploration department. Their aim is to explore different systems and planets, and document fauna and flora all of which are in EPM territory. It is managed by EPM member Benzi Cosmo.

Instar is the department of the EPM that specialises in "supernatural" investigation of the No Man's Sky universe. Essentially, its main goal is the documentation of glitches and bugs that occur in the game and their categorisation and classification. It was formed on the 9th of August 2020 by SGT SLING. Unlike the rest of the departments, Instar has only one rank, Paladin, which is achieved by reporting multiple glitches in the game.

The Phantomial Intelligence Corps was formed during the Araen Conflict on the 14th of August 2020 with the intention of gathering intelligence against enemy forces. It acts as the reconnaissance branch of the PSF and assists it with the information it obtains.

The Trinity Pact was announced on the 26th of August, 2019 by HCIS Director optimus3097 and EPM Viceroy blek18. It is an alliance of three civilizations, the EPM, the Helios Confederation of Independent Systems and the Domus Stellaris Confederation and is named after the treaty the three signed. Its aim is to grow and expand the Xbox Universe while remaining as a sprawling union and a subcommittee of the Federation.

Ever since the 4th of June, the EPM and the DSC have departed the Trinity Pact, leaving only the now transformed Helion Trade Federation in it.

The Collective abbreviated to 'PTC' is a company run by members of the EPM.

It is a subset of T3 Economy systems within EPM space in Euclid and beyond. PTC systems are classified based on their location. The Collecitve itself has changed since its foundation, records of its history are stored within its headquarters archives.
Currently most services the PTC offered are under the jurisdiction of the NLMO.

Members can use prefixes/suffixes to indicate that their planet/system/base is a part of the civilization:

Note: Most systems discovered post-Beyond use the aforementioned guidelines. In addition, the planet's name guidelines are not a necessity but the rest of them are considered a requirement for proper cataloguing.

If you wish to join you can use the following links to join our other platforms:

Since 29 February the EPM has created its own ranking system for the PSF, its military force. For a visual conceptualization, view the Gallery Section. More details below:

Since 21 March 2020 the EPM created specializations for the NLMO, details below. For a visual conceptualization, view the Gallery Section.

Since 1 June 2020 the EPM created specializations for the Phantomial Cosmonauts, see details below. For a visual conceptualization, view the Gallery Section.

For a list of members and citizens, refer to our census page.

A new EPM Xbox Club has been established, under the name NMS Empire of Phantomium Marxium. The owner of it is Viceroy blek18. Travellers are warned that any other club with another owner or a slightly different name are impersonating the EPM.

The following systems have been discovered by the EPM:

Not all of the above are located within the current borders of the EPM. The systems below are within the borders or are considered colonies:

The capital system preserves its predecessor's name, only difference being the numbering. Even if it previously indicated socialistic/communistic ideals, it still remains an important monument to the EPM's past.
As of March of 2020, the system [EPMu] Revotlwo-Kepler II has had its name reverted to the original pre-generated name, Naossas.
Unlike the first time it moved, the territories surrounding the Quvele Adjunct are still recognized by the EPM as its own territory. In addition, the colonies in other galaxies have been discontinued for the time being.

The bases showed here are not focused on the production of resources, but they still may house small facilities for it.

The bases listed here have been given encrypted names to showcase their features, and as such they do not represent the in-game names of the bases.

The following are laws and directives that are to be followed regardless of any circumstances.

Paragraph I: Actions that are to be taken by members of the EPM that affect it in any way are to be discussed first with the Emperor or the Viceroy.
Paragraph II: As a continuation of the previous paragraph, if a member wants to establish a company within EPM space (5000 LY radius from the capital system) he needs to be granted authorization to do so by either the Emperor or the Viceroy and also be able to maintain its Gamepedia page.
Paragraph III: All members of the EPM are to treat each other equally and with respect, failure to do so will result with the ostracism of the perpetrator from EPM space.
Paragraph IV: Any member who is deemed a threat to the EPM and its citizens will once again be ostracized from EPM space.

Paragraph I: Warships of any kind that enter the territory of the EPM without authorization will be treated as a threat and dealt with accordingly.
Paragraph II: As an exception of the previous paragraph, any warship belonging to a civilization member of an alliance the EPM partakes in will be treated as allies and can feel at home.

The EPM has friendly relations with the following civilizations/companies: