From No Man's Sky Wiki
Jump to: navigation, search
The subject of this article is from the Visions update.
The information from this article is up-to-date as of 13 August, 2019.
This page fills the role of Embassy for a Civilized Space community. The information found here represents a user-created civilization that is a creative addition to the game.

The Empire of Phantomium Marxium is a civilized space community. 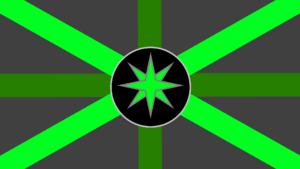 The official flag of the EPM. 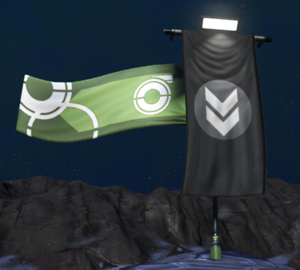 The registered flag of the EPM on the Federation Vexillology Department.

The Empire of Phantomium Marxium is a Civilized space community. It is located in the Gocutul region of the Euclid galaxy, with its capital being Hoth (EPM), located in the Revoltwo-Kepler I system. A directive issued by the Viceroy states that as of the 31st of July the EPM's territory is to be considered a sphere with its center the capital system and a radius that extends up to 5000 Ly.

The civilization follows a political system resembling that of an empire. Current holder of the "Absolute Emperor" title is Jikomiko.

The second in power and holder of the title "Viceroy of the EPM" is blek18, but the political power is mostly equal between him and the Emperor.
A message from the Emperor: "All Travellers are welcome! Let's build A GREAT EMPIRE to unite all Xbox players!"

All members are to obey directives and orders issued and given to them by either the "Absolute Emperor" or the "Viceroy of the EPM". In addition, members are required to follow the the Articles listed under the Directives & Laws section.

Previously, the EPM was welcoming Travellers from other platforms. It has been consequently proven however that it is too difficult to manage colonies in other platforms, and as such the Empire of Phantomium Marxium is to remain an Xbox only civilization.

The EPM's most important goal is to create a prosperous civilization with its core operations set in the Xbox universe of No Man's Sky. The accomplishments of joining the United Federation of Travelers, and the establishment of a localized community on Hoth (EPM), lead to the expansion of this objective; to industrialize the Xbox Universe as much as possible so it is equal in terms of organization to the other two universes.

In order to accommodate the aforementioned needs, a company is to be founded which is specialized in the agricultural and mining fields. The Phantomial Corporation will establish farms and mining refineries which will be uploaded and made public to all Xbox Travellers. Essentially this expands our purpose to profit collection as well as general construction of base establishments. Currently this idea has been postponed due to ill knowledge of future universal events.

The Phantomial T3 Collective abbreviated to 'PTC' is a company run by members of the EPM.

The Collective is a subset of T3 Economy systems within EPM space in Euclid and beyond. PTC systems are classified based on their location. You can submit your discoveries into the PTC on our reddit page: here

On the 3rd of August, 2019, Emperor Jikomiko announced the launching of the EPM's own military force called the Phantomial Space Force. The main goal of the PSF is to preserve peace and order within EPM space, and if need be, intervene in galactic affairs for the same preservation of peace and order on an intergalactic scale in the Xbox Universe.

The PSF has its own fighter, dubbed Phantomial T3-M1 "Vector" and is based on blueprints created by the Phantomial Corporation, which itself is still under construction.

Note: Credits go to eharris8484 (unassociated with the EPM) for actually finding the location of the fighter.

Before the Empire[edit | edit source]

A new universe was birthed and with it the Travellers that wanted to explore and document it. However at that time it was poorly organized with most civilized spaces there originating from the other two existing universes. Two Travellers in question, Jikomiko and blek18 wanted to be part of these civilized spaces. As such, the latter joined the The Communist Constellations of U.S.S.R, a civilization originating from the so called PC Universe. He established the colonies of Olleywo-Reles XVI and Oktovri Centauri V/I in the Xbox Universe's Hilbert Dimension. Soon after, Jikomiko joined as well, establishing his colony in Revoltwo-Kepler I which is in Euclid.

The leader of the CCU, known as Einhus, accepted blek18 with delight, but by the time Jikomiko joined, he wasn't found to issue a rank to the new Traveller. While at first this didn't seem suspicious due to communication difficulties always being present, later investigation revealed that Einhus had deleted his own records of existence. The two Travellers were shocked and felt betrayed and abandoned.

Following this, they thought that it would be best if they created their own civilization, taking with them their already established colonies and incorporating them into their newly formed Empire of Phantomium Marxium.

The Generations of the Empire[edit | edit source]

Following its foundation, the EPM remained still for some time. It was a month later that the first member, KEETH1775, joined and even then ideas were only ideas. Some more time passed until things started to speed up for the EPM.

It was on the 25th of April 2019 that the biggest organized meeting among the members occurred. The then current members; Emperor Jikomiko, Viceroy blek18, and new members KEETH1775 and Le_Matomaty held a meeting on the capital planet. There were discussions regarding future projects, and overall what the future would bring for the EPM. After the discussions, the four members called in every green ship they had to seemingly compete for an unknown prize. In the end, what came to be was a great showcase of green starships.
This magnificent day was to be remembered as the First Negotiation Day and those who participated have been deemed as the Founders of the Empire.

After that, a period of growth followed for the EPM. The population on the capital planet started to rise, as well as the number of systems claimed by the Empire.

The last organized event of the Visions Era was the diplomatic meeting between the Emperor, the Viceroy and Grand Marshall RandomStrangr73 of the Domus Stellaris Confederation. The discussions led to the construction of embassies by both parties in each other's territory and the strengthening of relations.

While not necessary members can use prefixes/suffixes to indicate that their planet/system/base is a part of the civilization:

In case of naming systems not belonging in Euclid, the prefix needs to include the number of order of the Galaxy. Example of a system located in the Hilbert Dimension:
[EPM-2] <DesiredName> => [EPM-2] Revoltwo-Kepler I

Note: Not all current systems and planets follow this rule due to it being established after they've been given names.

If you want to join, you should message any of the current members that have a link to reddit and ask them there.

Founders of the Empire[edit | edit source]

An unofficial member census can be found here.

Note A: The Homeplanet option has been rendered obsolete after bases on Hoth (EPM) have been established by multiple players.

Note B: The Founders of the Empire are the members who were in the Empire when The First Negotiation Day took place.

Some names of planets and Star systems may indicate socialist/communistic ideals. This is due to our previous affiliation with the CCU. After formally exiting the CCU said systems and planets remained in our control but the names can't be changed, so they might as well be considered "historical monuments" of our past.

Bases that contain production or extraction facilities will be listed here until the official foundation of the Phantomial Corporation, which will brand all production related bases that belong to the EPM. Some bases may already have the "PhCo." brand name due to them being created before the decision of postponing the corporation's foundation date.

The initiative for outdoor sources of agricultural material has been started by SparkiinJayz, but all members are encouraged to create farms near the capital. The core idea of SparkiinJayz is to take advantage of a planet's biome for specific plant cultivation.

The following are laws and directives that are to be followed regardless of any circumstances.

Paragraph I: Actions that are to be taken by members of the EPM that affect it in any way are to be discussed first with the Emperor or the Viceroy.
Paragraph II: As a continuation of the previous paragraph, if a member wants to establish a company within EPM space (5000 LY radius from the capital system) he needs to be granted authorization to do so by either the Emperor or the Viceroy and also be able to maintain its Gamepedia page.
Paragraph III: All members of the EPM are to treat each other equally and with respect, failure to do so will result with the ostracism of the perpetrator from EPM space.
Paragraph IV: Any member who is deemed a threat to the EPM and its citizens will once again be ostracized from EPM space.

Paragraph I: Warships of any kind that enter the territory of the EPM without authorization will be treated as a threat and dealt with accordingly.
Paragraph II: As an exception of the previous paragraph, any warship belonging to a civilization member of the UFT or any other alliance the EPM partakes in will be treated as allies and can feel at home.