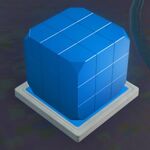 Encrypted Navigation Data is an interactable object that can be found on desks and tables inside various buildings and space stations.

It has various appearances and can interacted with. It rewards the player with 11-14 Nanite Clusters or 1 Navigation Data.