Enmen is a star system.

Enmen is a star system on the Delta meridian at the end of the Delta Spiral in the Euclid galaxy. Its distance to Delta Polaris is 105ly!

Once a proud Korvax system, the temporal anomaly N07E24-X20T18 left it devoid of sapient life. All that remains is its lonely and acidic ocean ringworld, opulent and proud. With its main economic attraction in the new age being Cobalt veins and some Indium, no one really has a reason to recolonize the system. 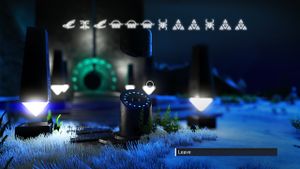 The system was under supervision of the cooperative scientific convergence of Chief Scientist Entity Dupishen. It had several Vy'keen visitors. Aboard the space station the Korvax offered visitors access to their supply depot and their botanic gardens. Not even the Korvax were spared by their creator as the entire system's mechanical and biological sapient population met its end and all but one of its former non-sapient life. Today the system is a lost cause for all but the daring until recolonization begins. With little to offer, that might be a while.