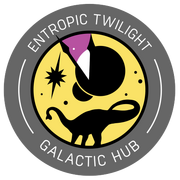 The Entropic Twilight Event is an event hosted by the Galactic Hub.

The Entropic Twilight Event is a series of competitive events (referred to as a single event, as they run consecutively) hosted by the Galactic Hub. The event revolves around the concept of an apocalypse coming with the NEXT update, as the universe will likely be regenerated again (either partially or entirely), and the Galactic Hub may need to relocate.

This five-part event is made up of various competitions, each with some degree of in-game content. Prizes will include real-world Galactic Hub items, with more details coming soon.

The Entropic Twilight Event will conclude on July 17, 2018, one week before the NEXT Update releases.

Whoever gains the most total points by the conclusion of the event will win; 1st place will win real-world Galactic Hub items, and 2nd and 3rd may or may not. Check back soon for more prize details!

As the last stars in the Shungka Void are swallowed by the encroaching blackness, your shaky hands scramble to load another warp cell from within the cockpit of your starship. This engine is your only salvation, and you're determined to push it to the limits. You're not about to trust your life to any garbage-scow junkyard shuttle: only your Escape Ship can save you now.

The environmental temperature measurements displayed by your exosuit are steadily rising, and the piercing noise of the Sentinel Walker's laser fills your ears. This rock, your only cover, is heating up rapidly, soon to explode. Determined not to meet your end by a malfunctioning machine, you reach for your multitool, dial it to the correct attachment, and hit the Jetpack hard. Turning to look the Walker in its single red eye, you pull the trigger of your Survival Weapon.

Like old sailors, travelers of the stars are prone to exaggeration. Whether for glory, as frequently seen in old Vy'keen warriors spreading tales of space-whales in the lowest points of the Marmor Spur, or for profit, as exhibited by Gekoil Salesmen insisting they can sell you the location to the galaxy's only Omegon asteroid, truth sometimes seems to be valued only by the Korvax.

Still, it was a foolish move to fly past that beacon. To dismiss it as some greedy Gek's attempt to protect his source of Emeril, or another Interloper with a strange sense of humor playing a prank on you. It was this disregard, this reckless abandon, which has now found you affixed in the gaze of the Galactic Hub's strangest Mutated Beast.

These explosions started as terrifying, but have quickly become tedious. Where you once feared for your life, you're now more annoyed that the last Cyclotron Ballista volley from a passing ship caused you to drop your bowl of Baked Cucrassula. In these end times, before the GHDF can mobilize to defend you, chaos reigns. But against all odds, you've maintained order, a pocket of resistance to the ruling entropy. Your Armageddon Fortress is your sanctuary in a sea of fire.

July 25, 2018. The inky blackness seeps back to the eldritch borders it crossed to reach us, hundreds of thousands of light-years from here, where the stars in the night sky end. A new universe blinks to life before us, new possibilities in every nebula. The storm has cleared, and the sun is shining, but the nostalgia remains as you run your fingers over worn pictures taped below your starship speed display. These rare visual artifacts are your only possessions from a forgotten time, from a younger universe, your Memories of Home.

How to Enter / Rules[edit | edit source]

Entries must be posted on the Galactic Hub subreddit, with either "ET" or "Entropic Twilight" in the title.