Evueta is a planet in No Man's Sky.

Evueta is a planet in the star system HUB1-21E Veggjoro I in the No Man's Sky universe.

Seraphim Risen touched down here on their way through the Hilbert Dimension looking for a new place to call home. Upon finding no extraordinary fauna or flora and being set on by the local sentinels, they quickly lifted off. After discovering members of genus Rangifae on neighboring planet Hicombe, they returned here to put down a mining base near the portal for future use and resource retrieval. To date, all but one species of fauna have been documented.

The planet is notable for the sporadic tower-like mountains that dot its surface. Reaching almost into the clouds, they interrupt what is otherwise a relatively flat and desert-like world. Plants and minerals can be found on the sides and tops of these, and one such mountain overshadows the base on this world. The dusty air is frequently filled with yellow, radioactive dust as numerous storms wash across the planet. Between these extreme storms and the hostile sentinels, documenting this world is a hazardous endeavour. Visiting interlopers are advised to come prepared for extremely hostile conditions if leaving the immediate vicinity of the base. 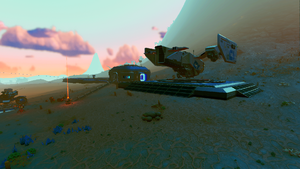 A-In/O2 Depot is located in the shadow of a tall, singular mountain. The base is located at -16.15, -163.08. A save point and signal booster are located at the base, as well as landing pads, Pilgrim, and Activated Indium and Oxygen depots. It is only a short walk from the portal as well. The portal is located at -15.35, -163.24.

The following glyphs are the portal address for this location.

Sentinels are extremely pervasive and extremely hostile. They tend to appear almost instantly after landing or coming to a stop in an Exocraft. They make documenting the planet extremely tedious, requiring almost constant attention to avoid or destroy. Building bases is also a challenge with them, as creating complex structures while outside will invite almost constant interruption.