From No Man's Sky Wiki
(Redirected from Exotic Trophies)
Jump to: navigation, search 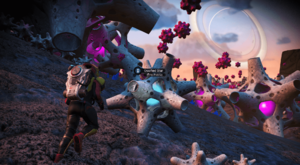 A player picking up an Ossified Star

Stabilised Reality Glitch is a type of base building product.

Stabilised Reality Glitch (also referred as Exotic Trophy) is a type of base building product. It can be found on exotic planets.

icon but must be within 100 units of the player

It can be picked up by pressing

(PS4/PC/Xbox) and gives 1 piece of a specific product, but it does not unlock its blueprint.

These type of products can be found in the Build Menu under the Decoration/Glitches.

The following products belong to this type and each of them found on specific exotic planets.