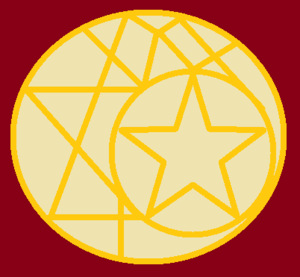 After a violent dispute with the Black Cloud Commonwealth in Hurenima involving the government and peoples' refusal to shelter the Kinderkin he rescued, and violent run-ins with the military and police, Ezegnegch is seriously outraged. Before leaving the area, he stole an Otsunomae-class Titan, relinquished the technology he provided to go in and out of the black cloud surrounding the region, revealed the coordinates of the highly secretive region while selling the cloud-piercing technology he worked so hard with the Hurenimans. Along with the Kinderkin he rescued and defectors of the region, he left the area in hopes of finding a better place for his people.

After a long and arduous journey that drove his race to the brink of insanity (Ancestral Galaxies drive Kinderkins insane), he managed to find a place to call home in the Rerasmutul galaxy, a very distant place that is almost, if not completely devoid of inhabitants. In The Arm of Pobelar, he and his people are able to start a new life and eventually, a place to call home. A tiny little civilization formed shortly afterwards. It flourished, accumulating a sizeable amount of wealth during its stay in the area. Two Trade routes were formed, several systems are documented, with some of them being rather interesting, especially Moscow.

When scientists, astronomers and superstitious practitioners predict a universe-changing event, the civilization took its sweet time to prepare, pushing its economy to its limits, amassing a large amount of wealth and resources over an extended period of time. Several starships were constructed to house an entire civilization for the great move. The capital ship Otsunomae received a dramatic upgrade and overhaul. Exploration missions were sent all over the galaxy to scout for potential new locations. Some were brave enough to go the distance and beyond, with one scout reaching as far Jasinessa and discovering the Kigaim Spur and Geskonar-Hek. They didn't take into consideration the possible effects of the event and instead, focused on exploration and putting the economy into overdrive. The result is a disaster that plunged the civilization into destitution.

When the event occurred, almost everything gathered is reduced into nothing but strange new things. Powerful technology turned obsolete, rendering the fleet weak and vulnerable. Thankfully, the capital ship remained untouched. Due to attacks from pirates and other external forces, the capital ship had to cram a lot more starships than it is able to handle. The abundance of basic needs gathered is reduced to almost nothing. The people are quickly getting restless. A new home and capital must be found and FAST. The move to Jasinessa was scrapped and instead, they had to search nearby regions for a suitable home. They sent scouts scrambling for potential regions and systems while the capital ship moves to a previously explored area around 4000 light years away.

Scouts have searched tirelessly for a candidate system in 10 different regions. Because time is of the essence, things escalated rather quickly as dissent is starting to increase at a more rapid pace. Finally in the Sasageid Band, they found one and in the nick of time! The supply of basic needs is almost out. They immediately moved to the Karlan-Belo XIX system. The capital is eventually established in Rahaka Tau, a lush planet with relaxed sentinels. The planet is then quickly exploited, with everyone gathering resources to feed the hungry and thirsty citizens while obtaining materials for rebuilding the civilization.

As if filled with euphoria of finding a new home, the Eyfert Khannate went nuts on exploring the region, finding wealthy system after wealthy system to form trade routes and places of importance like a shipbuilding system, a port system, a business system and more. While all of that is happening, Ezegnegch quietly retreated to a nearby region and found the most beautiful planet he has ever seen so far.

Overexploitation resulted in the planet's climate quickly shifting to a stormy one, with scalding rainstorms occurring at greatly increased frequency. Explorers were ordered to scout the region for another potential capital planet. Luck wasn't on their side as no new suitable planet is found the region and the 26 others surrounding it. They decided to relocate the capital to Eafort XVIII, an uncharted blue system located very close to the former capital. The move didn't go as smoothly as planned because of a particular event. A tall Kinderkin by the name of Rakugaki already lives here but was forced out and exiled to a system in a nearby region. This caused even greater dissent among the populace, especially the taller and wider (more overweight/obese) Kinderkins, some of them owning large mega-corporations in Apstey-Sovos and prime realestate in the Joelri District. Along with heightist and wideist allegations against Ezegnegch the Khann, a bloody and violent civil war occurred, resulting in the deaths of tens and thousands of mostly Kinderkin.

The civil war ended but it caused many reforms within the civilization and most especially, its leader. Rakugaki is brought back to his home and received compensation equal to double the value of his assets. Though it will take time to heal, the Eyfert Khannate is back once again to the road to peace and prosperity.

Some time has passed since the end of the civil war, but it is still fresh in the minds of the citizens. While the move to Eafort XVIII is a success, it came at a cost. Construction of the capital is still on hold indefinitely since, with very little to no progress. Because the (now former) de facto capital Sebaddo Utsus and the Ilbingew Band are reserved for only a chosen few, the government controlling the Sasageid Band is not centered on any system or planet.

Various community events across the universe were held and citizens are encouraged to participate. Majority focused on the more destructive side of the event to relieve stress and forget the painful memories of the civil war, destroying as many PESTINIA PESTIS and Vine Whip plants as possible in as many systems as they can. Time passed by. Life goes on.

It is just another ordinary day in the life of an Eyfert Khannate citizen when an explorer stumbled across a peculiar uncharted system in the nearby Tenhoe Nebula while doing an exploration-focused community mission. After briefly touching down on all 6 celestial bodies, he requested some help due to the system's dangers. Now armed with a full team of explorers, military personnel and even the creme de la creme of Kinderkins Ezegnegch and Namanchildaggui, a thorough exploration of the system began. After a period of time, the team suffered many casualties but it has been decided. The system will be the new capital of the Eyfert Khannate. It is a good distance away from the former capital and it is perfect for building a Stasis Device / Fusion Ignitor Factory. After further discussion with the top government officials and the consent of all citizens, the decision is almost unanimous.

The new capital will be relocated to the Egionetsk system, in the planet Edaemon VII. There is a feeling of nostalgia from the citizens as the new planet reminds them of their home from the Euclid galaxy, with its seemingly never-ending firestorms from hell, competition from the native fauna, in particular a demonic-looking giant bear creature, and a sentient race of violent, psychopathic demonic-looking humanoids (the humanoids are fanfiction, they don't exist in the game). However, negotiations to the humanoids are well underway and the peace treaty's progress is going smoothly. The new Eyfert Khannate Power House is built swiftly, indicating the citizens' full support of the move. The move is a complete success, and a new exploration campaign called the Tenhoenic Revelation began.

In just a short time, a fully functioning seat of power is constructed, along with a myriad of bases, racetracks, houses and more. Trade routes are established. Multiple systems fit for FISD farms are discovered, though the main one is still located at the capital system. Despite an exploration boom, the region is still not fully explored due to its large size and amorphous, featureless shape. Eventually, exploration of nearby regions began as almost every system in the Tenhoe Nebula is discovered.

The moment everyone feared is coming back to haunt them once again. Scientists, astronomers, religious and superstitious practitioners from both the civilization and the demon-like humanoid race in Edaemon VII, predict another universe-changing event in the near future. Learning from their past mistakes, everyone instead prepared in a different way. Analysis of which entities are most likely to remain almost unchanged is conducted, very important especially when it comes to feeding the population. Cucrassula, more commonly known as Echinocactus, seems to be the most stable food and water source. Multiple systems have been scouted for various purposes, such as specific ship upgrades, more potential capital systems and more. Stasis Devices and Fusion Ignitors seem to be stable as well. Production of both valuable resources have been ramped up significantly. Citizens, including the humanoid allies, now have to attend a mandatory weekly training session focused on the potential dangers of a universe-changing event and preparing for it.

Much to everyone's surprise, the universe experienced almost no change. Everything is still intact and useful, though there are a few differences. Some planets' oceans experienced a change. Edaemon VII's beautiful underwater scenery devolved into a bleached coral kind of biome, and that is making Kinderkins... slightly restless. Even moreso when they discovered a beautiful lush planet in the Usskyv-Nede X system. Being the fickle child-like (in this case, it means "greatly resembling human children") beings that they are, there are a few talks of moving the capital system... again... A few elements underwent a name change, and Kinderkins can't explain why they can't remember the former name of Faecium, Coprite. Otherwise, everything else is the same and intact.

In the new era, the Eyfert Khannate has discovered most of their home region's systems and are now set to meticulously explore 6 new regions in what is called the Tenhoenic Declaration - claiming and exploring the Urmodian Void, Ukchuua and the FNAF (Four New Alien Frontiers) - Eyharg Quadrant, Rachepa Cluster, Zivaiur Cluster and Faegen. It is time to go BEYOND the home region and explore, explore, explore! For Kinderkins are driven by the exploration of the unknown.

This section is under development.

Spies and secret police of the Eyfert Khannate Elite Army report of a possible uprising by a powerful consortium of three megacorporations called the Great Itney Trio Group Under Duling (GITGUD) in the Arkson system. An Elite Army Explorer reported the incident in an unknown system of the attack, and is a sign of a potential uprising. The GITGUD Consortium is known for rather controversial and questionable operations and work ethics, such as an attempt to monopolize the Technology Industry (Arkson Cowest Inc.), contacts with enemies of the civilization (Dalowey's Destructive Devices) and allegations of a hostile takeover of the Eyfert Khannate (Emisso Conglomerate). However, there aren't enough evidence to prove of these companies wrongdoing... or are there? The three megacorporations are well-known for extensive lobbying and red-tape.