Favorite Master BU9 is a starship in No Man's Sky.

The Favorite Master BU9 is a Hauler-type starship in the universe of No Man's Sky. 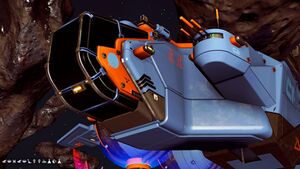 Most notable because of the rare glowing cargo pods it carries, it was originally discovered during Atlas Rises and then re-discovered during, NEXT, Visions and now Synthesis, looking roughly the same. The S class of this Hauler has always been one of the easiest ships 'relatively' to find. This ship includes several pre-installed techs: Phase Beam, Ablative Armour, Launch System Recharger, Emergency Warp Unit, and Efficient Thrusters.

This starship spawns quite regularly throughout the system. Finding a nice A class version is quite common. The planet Gwar seems to spawn the most S Class ships. During this expedition I came across around six other S Class ships; however, most of them were Shuttles due to this system being Korvax. I was most successful finding the S Class of this ship at the Space station.