From No Man's Sky Wiki
Jump to: navigation, search
The subject of this article is from the NEXT update.
The information from this article is up-to-date as of 28 October, 2018.
This article was catalogued by the Galactic Hub.

Final Destination Arena is a player base. 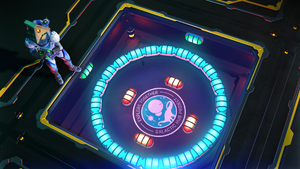 The Galactic Hub Emblem is featured in the center of the arena, brightly lit under a pane of glass.

Final Destination Arena is a player base, located in the HUB10-1C8 Tatl system. The base is designed for the purpose of player-versus-player multitool combat.

As the system itself is improperly named according to Galactic Hub Naming Guidelines, the moon hosting the arena was instead named with proper guidelines.

Final Destination Arena is composed of four landing pads, an encasing structure (which doubles as a place for photo mode operators or spectators to stand), and the main combat stage. With a 15x5 concrete floor combat stage, it is a small-to-medium-sized arena. The combat stage features four areas to take cover and a heavily-ornamented Galactic Hub symbol underneath the floor.

Gold Astronaut Statues watch over each corner of the arena, symbolizing the maximum-4-players (as of Update 1.59) able to fight in the arena at a single time. Anti-gravity generators (four small ones beneath each landing pad and one large one beneath the combat stage), keep the arena suspended motionless in the air.

A Save Point is also provided on the encasing structure's walkways, so competitors can easily recover any damage / lost progress / lost items from deaths or delete technology / modules without concern.