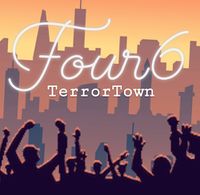 Four6 is a military orginization.

Densely populated and a location on a heavily radiated planet make Terror Town a very fortified stronghold. Four6 are well known for organization.

They are believed to be one of two surviving sets, working beside Snapstreet Red Force extreme, a elite team that branched away from Red Force. The name SS red force X was given from Snapstreet: "SS" the small town they created, and extreme being the harsh climate they moved to.