From No Man's Sky Wiki
(Redirected from Fourth Race)
Jump to: navigation, search
The subject of this article is from the Beyond update.
The information from this article is up-to-date as of 27 November, 2019. 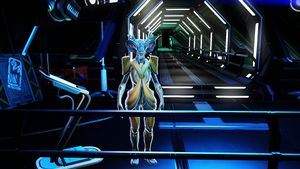 A Traveller aboard a freighter.

The Travellers are the fourth alien race.

The Travellers, also known as the Fourth Race, are an alien race in the No Man's Sky universe, introduced as a whole in the Atlas Rises update. Travellers can be randomly found at space stations, camps and trading posts and can give the location of a Traveller Grave when interacted with. It is possible for two travellers to appear on trading posts and space stations. They are very rare and difficult to find. They can also be found at freighters, but cannot be interacted with in this case.

A number of specific Travellers can be found aboard the Space Anomaly, as guests of Nada and Polo.

Most Travellers have slim humanoid bodies and the same average height, but besides that their physical features can greatly vary. They have been found with cat-like, bug-like, and amphibious-like facial features, or even entirely alien or with robotic heads. Apollo is a traveller whose body was almost entirely replaced by a mechanical casing, and -null- has a body that seems to be composed of large wires and computer plugs.

All NPC Travellers seem to appear as holographic displays rather than physical bodies, when they guide the player to a grave, it is revealed that the Travellers that gave them the directions are dead.

The coming of the Travellers, however unlikely, had been predicted ages ago by the Korvax Echoes.

The Travellers are entities created by the Atlas with a scan of its Creator's mind. The player character is the last Traveller created. Because of the Atlas' imminent death, the boundaries between realities are starting to fall apart, and now Travellers can see each other from the past, future, or alternate realities, as hologram-like individuals or as glitches. According to the Rogue Data and the last Traveller interaction, the Atlas correctly predicted that, in the final minutes before its death, the Travellers would finally be able to fully interact with each other and explore galaxies together.