Free Folk of the Fringe - Lore 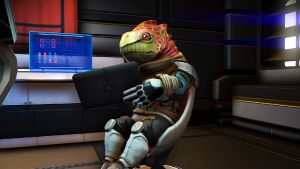 Free Folk of the Fringe - Lore is a history page.

The following information provides vital background information in regards to the Free Folk of the Fringe community. It has been been transcribed by Nippy O'Gek, a lead journalist of the Ivjapendy Fringe.

The Ivjapendy Fringe is a region comprised of a number of star systems in relatively close proximity to what is now called the Galactic Hub. The Ivjapendy Fringe consists of a comfortable number of lush planets with generally favorable characteristics. However, it is believed that this was not always the case.

Recent exploration by various travelers has uncovered Gek artifacts that offer proof that the region was first colonized by an offshoot of Gek many centuries ago. This offshoot, which has since been called the "Enlightened Ones" (EO for short) were different than the normal Gek of the First Spawn in that they were not nearly as bloodthirsty and were motivated by commerce. Travelers at this time believe that the favorable conditions of many planets in the Ivjapendy Region are this way through a systematic process of terraforming. It is believed that these Gek were primarily responsible for this. However, there is one artifact in particular that was clearly influenced by another race entirely - the Korvax.

Travelers to the current region called G-18 Gala, formerly known as Galashannga (likely named by the Gek EO), found evidence of a very special multi-tool called the Comforting Recoil II. This multi-tool is unique in a few different ways. It is an Experimental multi-tool with a light blue coloring lightly embedded with night crystal dust on the sides. Additionally, there is a cropping of Night Crystals jutting out from the top of the multi-tool above the handle. Night crystals possess two unique properties;

1. They are commonly understood to be highly reflective and are excellent substances for focusing light beams, which enhance the multi-tool's mining capabilities. It provides good enough damage for combat situations, but just not as powerful as most alien multi-tools.

The travelers were gifted a Comforting Recoil II in G-18 Gala, and the Gek who gifted it to them told of its history: 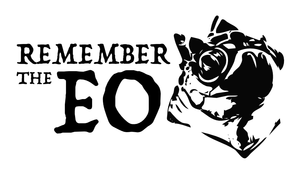 Common stencil of the EO as seen in the Fringe.

"Two centuries ago a Korvax dissident and exile named Rendok, traveled to the Ivjapendy Fringe region in search of sanctuary. Rendok found the Enlightened Ones and requested they provide protection and sanctuary in exchange for knowledge and scientific enhancement. The Gek EO recognized that this arrangement would be mutually beneficial and agreed. Rendok worked with various Gek EO and visited many of the mining operations that the Gek EO were undertaking. Rendok took special notice of the night crystals that the Gek EO located and started hoarding. He knew the properties of night crystals and how rare they were and theorized that they could be used to build tools to enhance mining and scanning capabilities. The Gek EO also recognized how useful a tool leveraging night crystals would be and fully agreed to support production. Rendok developed the schematics of the multi-tool while the Gek EO acquired the materials. A year later a prototype was tested and found to meet all expectations. It was named the Comforting Recoil, largely due to it low recoil during mining operations. However, mass production was interrupted by an unfortunate visitor.

The Vy'keen Kun'dune Empire apparently had a spy in their midst. The Kun'dune Vy'keen were alerted to this new development and wanted the multi-tool for themselves. They had the advantage of initiative and prowess, for the Gek EO had focused all their energies on their mining expeditions. The Kun'dune were sure of their impending victory and struck at the most inopportune moment for the Gek EO. Rendok, being a generally careful Korvax, had the foresight to hide the schematics before the Vy'keen could claim them. The Vy'keen exterminated all the Gek EO they could find and tortured Rendok in the hopes of recovering the schematics. Rendok did not relent and died with his secret knowledge. The Vy'keen tried for years to locate the schematics, but never succeeded in finding them. They eventually left to harass other regions.

A few remaining Gek EO eventually came out of hiding and were able to discover and decrypt clues left by Rendok on where he hid the schematics. They created a few and named these Comforting Recoil II, with the model number to denote that they were the iteration after the Vy'keen Kun'dune arrived."

The remaining Gek EO, led by Captain Sturkopi, are generally reasonable and will assist lone traveler's who visit their region by providing them a Comforting Recoil II multi-tool as reward for their long journey. This is what they tell travelers when they are handed one, but it is just as likely that tourism, zoology knowledge exchange, and commerce are the real reasons for the Gek EO generosity since they don't always give it out right away and have been known to gift it only after a traveler has spent enough time exploring and spending time at the commerce terminal. A persistent traveler will always be rewarded, and most travelers agree that it is a small price to pay for the exquisite and useful Comforting Recoil II multi-tool.

On the Fringes[edit | edit source]

News from the Fringe with Nippy O'Gek.