Fusion Ignitor is a tradeable. 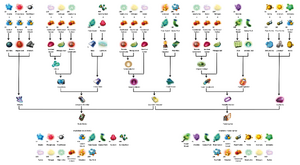 Fusion Ignitor is a tradeable that can be crafted.

A highly advanced piece of technology for use in the next generation of power plants. Producing a fusion core requires both intricate scientific skills and complex industrial processes.

The blueprint can be acquired from Manufacturing Facilites.

Fusion Ignitor can be built using a blueprint and the following ingredients:

It is one of the most valuable craftable items in the game, alongside the Stasis Device.