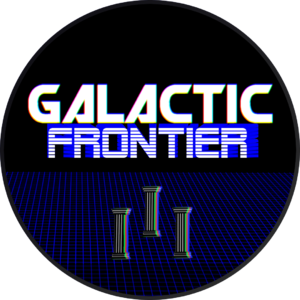 The Galactic Frontier has a long and varied history, beginning with the founding of Olpid. Details follow.

At the End of the first Century, a traveler by the name of Scafferoni was born at a Galactic Refugee Camp during the Bez-Har/Hova War in the Galactic Hub. Once the war ended, the young boy had to find a home. At 8.3 years of age in OLPIDIAN TIME, he left the Galactic Hub in a spiritual journey to find himself.

He embraced a long journey, searching for a god. In times of terror and raids by pirates he often needed someone to pray to. He then found the Simulation Religion. He started believing the theory that the universe he lived in was nothing but a lie. After five years of believing his life was a lie, he found that he still had no one to pray to. He then came across an ancient monk in the dark abyss of the galaxy. This monk told him about a God by the name of Olpidean, a massive dragon figure, it almost resembled a dinosaur type of shape like the Diplos he saw at the refugee camp he lived in at the Galactic Hub. He found comfort in praying to this God, and began to have his mind set on the impossible.

He dreamed of entire cities but could never build them. He read about the boom of new nations in the galactic newspapers and wondered to himself, why can't I build up a kingdom? He set forth and found others on his journey with him who also wanted to build an empire. The war that dominated his childhood shaped his mind and created a need for organization. A system that would prevent anarchy, and war. He dreamed of creating a system based on a social class that would regulate base building due to the severe economic depression caused by the war. The Hova/bez-Har war had taken up so many resources it caused an enormous depression that created a galactic law regulating base size.

This idea developed when Scafferoni attended a small university in the middle of nowhere. It was not until he attended this school that he realized that "the middle of nowhere" had a name. It was Delta. He excelled in the university but was put down on his ideology of Base Class Society. Later on in his life, he would bring this idea to life but some speculate that it will fall due to its harshness. After attending the University of Delta Scholars, he ventured out to create a nation with the people he met on his way.

Then he founded The Galactic Kingdom of Olpidian or what is now known as the Kingdom of Olpid as a Federation Nation in the 76.1 year of the first century in his 20's. The kingdom was founded under the ideology of the three pillars, an ancient idea by religious monks of Olpidean. The first pillar stood for peace, the second being power, and the third being perseverance. The nation also followed the ideology of Base Class Society in which the government regulates citizen's bases and their class.

Cyckaloop16's father was an Soldier in the HovaWar. He died three days before Cycka was born. He met Scafferoni when his planet was destroyed. At the refugee camp, he saw Scafferoni when he was getting his food package. He didn't talk to him but actually just pushed him because he needed some food of course. After that in his sleep, he was dreaming of three pillars and of Someone that searched for him. He found him. He saw the Atlas. His father. He saw Emily. He saw... peace. No Atlas. No Wars. He woke up. He was going to the Camp Administration to ask if there was someone called Scafferoni and twenty years later, the Frontier was born.

During the 93.375 year of the first century, Scafferoni and HelloGamesTM1 were beginning to develop the Olpidian Kingdom when a religious movement took place. The Simulationist claimed that a God by the name of the Atlas had come down to them and given them classes. This religious movement had a huge effect on the populace of the universe. Families and communities were split but the worst case was of the 16-A, a supposedly higher class that believed they were superior. In the 16-A movement of 93.375, a group of 16-A members including Scafferoni developed a horrifying ideology to take over the galaxy, and eliminate all inferior classes. This led to spy missions to spam propaganda across the galaxy through a familiar type of technology known as RedditGalactic.co that allowed civilizations to communicate. After numerous failed missions, the hate group was eliminated after it fell apart in 95. The remaining members joined Olpid and turned to Olpidieanisim and practiced loving others rather than forming hate groups.