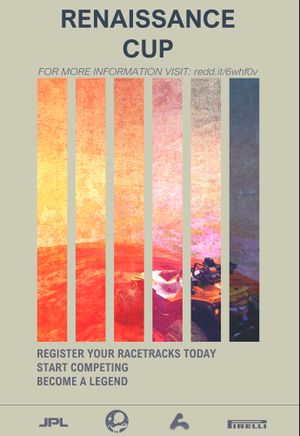 NOTE: The scores on this page are "locked in" and any further edits will be reverted. A new page will be created for general leaderboard racing; Renaissance Cup scores will be recorded on this page for archival purposes.

The Renaissance Cup was a multiplayer exocraft racing championship hosted by the Galactic Hub.

The Renaissance Cup was a multiplayer exocraft racing championship hosted by the Galactic Hub. It was essentially the "new version" of the old Galactic Hub Cup. Efforts to repurpose Renaissance Cup racetracks for regular racing, now that the Cup has concluded, are currently underway.

The following text in this section was from before the Cup concluded:

This is not a Galactic Hub-only event: all NMS players are welcome to join! However, some bases may be quite distant from their Portals, so make sure you will have enough time to reach the race before it begins. Do not claim a base on the same planet as a racetrack for the purpose of long-distance Portal travel, or you will overwrite the racetrack base. (You can claim a base if you turn Base Sharing off, but please remember to remove your base from the system before turning it back on.)

Players can compete against each other in real-time and/or on the leaderboards at separate times by beating each others' scores.

Although you can't see other players' exocrafts, you can at least see them as floating orbs / "Glitches." This allows you to compete against other players or spectate ongoing races.

The Renaissance Cup was a 7-day-long event which concluded on October 29, 2017.

The only challenge to multiplayer racing is making sure all players begin racing at the same time. For this purpose, we will use the Coordinated Universal Time clock. Players will press "Begin race" (R3) at 5:00 PM exactly.

Because of Rule 1, this measure is mostly just to ensure the race is fun for everyone and well-synchronized - it's not possible to cheat on the leaderboards by starting the race early.

The winners of the Renaissance Cup will win real-world prizes! Prizes were physically manufactured by AndyKrycek6 using morgvom_org's art.

How to Compete[edit | edit source]

Competing in the Renaissance Cup is easy: just show up on time! If you can't make it to the scheduled real-time races, you can race any of the tracks early or late, until the 30th when the winner is announced.

If you're unable to edit the Wiki, just send the screenshot of your lap time to 7101334 or any other Galactic Hub Staff member. 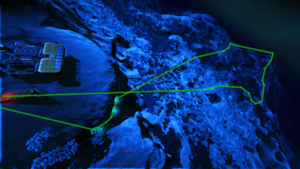 After using a ramp to launch you off a massive cliff, this frozen-forest race takes you winding up and down a mountain ridge, before again launching you across the valley. Right before the finish line, you will be required to climb a cliff in your Nomad, timing your boosts carefully to scale the vertical cliff.

A two minute circuit that requires well-timed jumps and careful braking that takes you by the shallow waters and rock formations adjacent to the Gem of Saffronia. 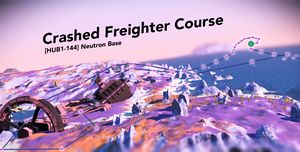 After a long distance race across the ocean, racers reach a crashed freighter and jump over and through its wreckage before heading back to the finish line. 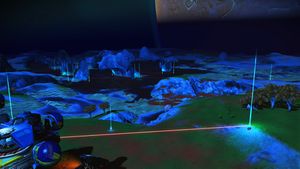 Starting in Nicky_Tsardust's Firebase Phlebas, the Azad Gauntlet forces you to weave and slalom between ancient natural pillars, race down flooded canyons, and dive off of a rock formation into an underwater cave system, all while dodging Azad's 2.5-meter-long sharks. 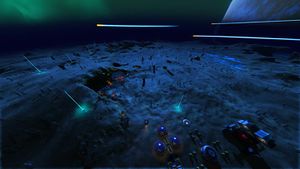 Starting underneath the gaze of the Base Jazart-Pran's WALL-E statue, racers will be kicking up sand as they fly across the sloping desert dunes. Be prepared to occasionally slam on the brakes in order to cross narrow rock-bridges over caves and chasms! 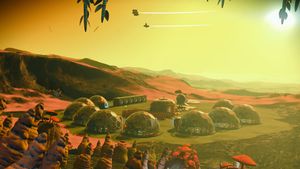 You will spend most of this race balancing on this planet's incredibly narrow mountain ridges, before turning into a small plains area and back to the base. 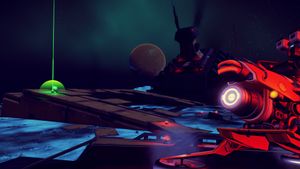 This epic race, with a full stadium start/finish, takes you around the crashed freighter situated close to the base/start. Spectators are welcome in the viewing balcony or in the VIP seating area 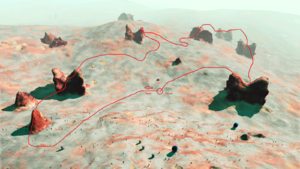 The Six Deadly Rocks. A racetrack that goes through six massive rock formations.

The Six Deadly Rocks is a difficult racetrack that takes racers through six massive rock formations across the planet's rolling plains. 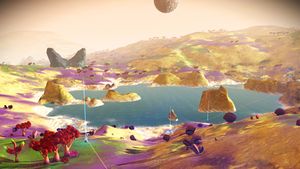 Rathloriel Run is an endurance test over land, lake, and ocean, with occasional precision-based challenges upon the planet's particular geological features.